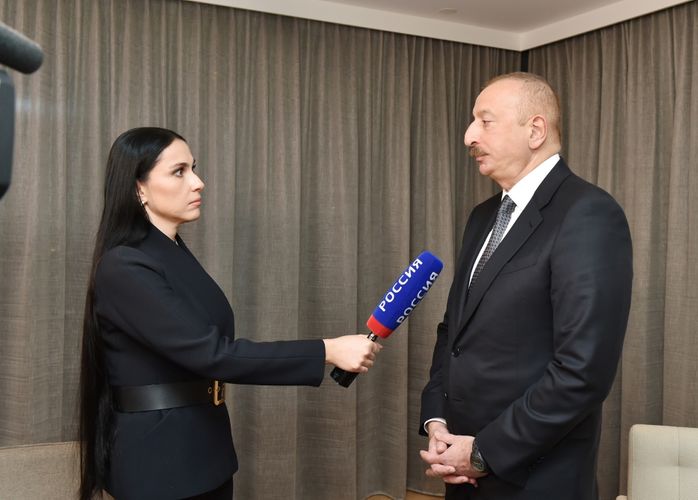 On January 20, President of the Republic of Azerbaijan Ilham Aliyev was interviewed by Rossiya-24 TV channel of Russia on the sidelines of the World Economic Forum in Davos, APA reports.

Rossiya-1 and Rossiya-24 TV channels broadcast the interview with the head of state.

APA presents the interview which was shown on “Rossiya-24” TV channel.

Presenter: OPEC+ is a successful format of multilateral cooperation, which has helped to determine the fair price for oil today. The deal between oil market participants has proved effective and should be extended. This opinion has been expressed by President of Azerbaijan Ilham Aliyev in an interview with our channel on the sidelines of the Davos Economic Forum.

- Given the tensions observed in the Middle East, what dynamics of the oil price can be expected this year?

- It is difficult to make a prediction. I think that both producers and consumers are satisfied with the current price level. As for Azerbaijan, a price of $55 per barrel has been included in our budget for this year. But the price is much higher now. Therefore, I think that the price will remain within this range of $55 to 65 if there are no force majeure circumstances. Moreover, the OPEC+ format is proving very effective and Azerbaijan takes an active part in the work of this format. We are reducing production in connection with our obligations, and the countries that are not members of OPEC are essentially acting in the same way as OPEC members today. Therefore, OPEC+ is a very successful format for multilateral cooperation, which has essentially determined that the price of oil today is fair in our opinion.

- In your opinion, should the OPEC+ deal be extended?

- This will be discussed in the near future, of course. But given the fact that we are seeing specific results, of course, I consider it would be appropriate to extend it. Because in the event of non-extension, we do not know how the market will react and different speculative trends may appear again. Therefore, I believe that the extension would make sense.

- In your opinion, are there any signs of multi-polarity in the world today?

- Of course, the world is developing as a multipolar one today. There are several centers of power. Of course, there are issues of concern to us, the escalation of tension in our region. But we also see positive dynamics, when countries that did not previously have such close interaction are acting almost like allies today and making a great contribution to regional stability. Therefore, a multipolar world is already a reality. I think that these trends will be strengthened over time. And this is positive because it is a guarantee of stability in the world.

- Are there any signs that one of the countries of the world is gravitating toward a more unipolar world?

- You know, large countries always have their interests outside these own boundaries, and each country wants to secure better conditions for itself and expand its sphere of influence. This is nothing new in that. We have been observing this for centuries – with a varying degree of intensity. Therefore, this is not the question. The question is that the current structure of the world order, including the structure of international relations, is such that it implies multi-polarity. If we look at permanent members of the UN Security Council, it is a reflection of the multi-polarity of the world. And no decision can be made without the consent of one of the permanent member-countries. Therefore, I think that countries shouldn’t strive to ensure unipolarity for themselves, but, on the contrary, find elements of cooperation that will benefit everyone.

- Will Azerbaijan supply oil to the Republic of Belarus?

- I don’t know. This question is not for me. This is probably a question for the oil company. We supplied oil to Belarus several years ago, but then this process was suspended at the initiative of the Belarusian side. If such a need arises again, the State Oil Company of Azerbaijan will consider this issue. Today, SOCAR Trading is one of the largest trading companies, and a large portion of the oil it sells is not produced in Azerbaijan. Therefore, purely technically, the Azerbaijani company can supply anywhere. But the issue of price, the issue of logistics, the issue related to contractual obligations – all this should be considered between respective companies.

- Thank you very much!

On January 20, President of the Republic of Azerbaijan Ilham Aliyev was interviewed by Rossiya-24 TV channel of Russia on the sidelines of the World Economic Forum in Davos, APA reports.

Rossiya-1 and Rossiya-24 TV channels broadcast the interview with the head of state.