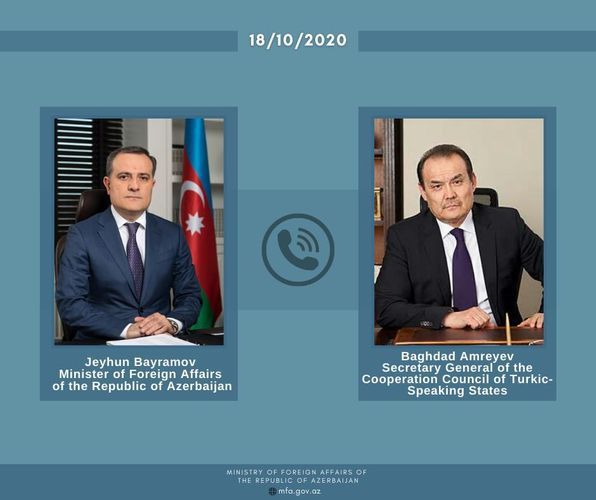 On October 18, 2020, Foreign Minister Jeyhun Bayramov held a telephone conversation with the Secretary General of the Cooperation Council of Turkic Speaking States (Turkic Council), Baghdad Amreyev, the Press Service Department of the Ministry of Foreign Affairs of the Republic of Azerbaijan told APA.

Minister Jeyhun Bayramov informed the Secretary General on the latest situation in the region and stressed the violation of humanitarian ceasefire by the armed forces of Armenia for the second time after the formal declaration of the truce. He noted that intensive shelling of the Azerbaijani positions and an attempt to attack in the directions of Fuzuli, Jabrayil and Hadrut regions openly shows that Armenia is ignorant to the ceasefire and aims to regain the positions in the occupied territories of Azerbaijan. Minister emphasized that Armenia should obey the norms of international law and demands of the UNSC resolutions.

Secretary General Baghdad Amreyev condemned the recent attacks by Armenia on the towns and residential areas of Azerbaijan situated far away from the conflict zone and highlighted the solidarity of the Turkic Council with Azerbaijan. Baghdad Amreyev stressed that Armenia should stop attacking civilians and withdraw its forces from the occupied territories of Azerbaijan in accordance with the resolutions of the UNSC.

Minister Jeyhun Bayramov thanked the Secretary General for the support of the Turkic Council to the just position of Azerbaijan based on norms and principles of international law.