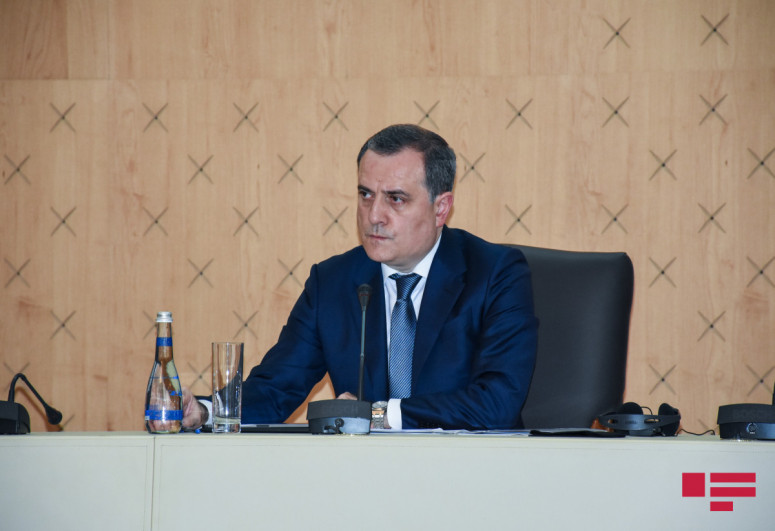 Minister of Foreign Affairs of the Republic of Azerbaijan Jeyhun Bayramov has made a speech at the 131st session of the Committee of Ministers of the Council of Europe on 21 May, MFA told APA

I would like to start by congratulating Germany for the successful completion of its Presidency at the Committee of Ministers and extend all our support to the incoming Hungarian Presidency.

January 25, 2021 marked the 20th anniversary of the accession of Azerbaijan to the Council of Europe. Throughout its membership, Azerbaijan has been actively engaged in constructive cooperation with the Council of Europe and its various institutions across all pillars of the organization. We are determined to continue this cooperation on the basis of mutual respect and understanding.

This year marks as well the 30th anniversary of the restoration of Azerbaijan’s independence in 1991 and most importantly, it is our first year free of the armed conflict in these 30 years of independent existence. Indeed, the trilateral statement of the leaders of Azerbaijan, the Russian Federation and Armenia signed on 10 November 2020 put an end to the almost three-decade-long armed conflict between Armenia and Azerbaijan. This document has created necessary conditions for the normalization of relations between Armenia and Azerbaijan on the basis of mutual recognition of and respect for each other’s sovereignty, territorial integrity and inviolability of internationally recognized borders. My country is committed to pursuing vigorously this historical process to consolidate peace and stability in our region, for the sake of the wellbeing of our respective nations.

Regretfully, we still observe violations by Armenia of its commitments under the trilateral statement of 10 November, as well as more generally, its obligations under the international humanitarian law. For instance, it is particularly disturbing that Armenia refuses to share the maps of mined areas in the recently liberated Azerbaijani territories. Sadly, since last November, mine explosions have killed and wounded more than 120 Azerbaijanis. Sharing the maps of mined areas is an absolute and urgent necessity to save human lives, accelerate the post-conflict rehabilitation and reconstruction process, and ensure the realization of the inalienable rights of the hundreds of thousands of IDPs to return to their homes in safety and dignity. Armenia also continues to refuse to provide information on the fate of around 4000 Azerbaijanis who went missing in the course of its armed aggression against Azerbaijan in 1991-1994.

Besides that, the international community, including the Council of Europe should remain resolute in persuading Armenia to give up its revanchist actions and anti-Azerbaijani hatred, and instead, seize the unique opportunity for sustainable peace, regional cooperation and development. We also expect all international actors to refrain from any actions that can undermine the emerging positive, yet fragile process of building peace and reconciliation in our region. In this respect, I would like to reiterate our strong belief in peaceful coexistence between Azerbaijan and Armenia and express our firm willingness to work together with the international community, including the Council of Europe to this end.

Thank you for your attention," reads the speech.