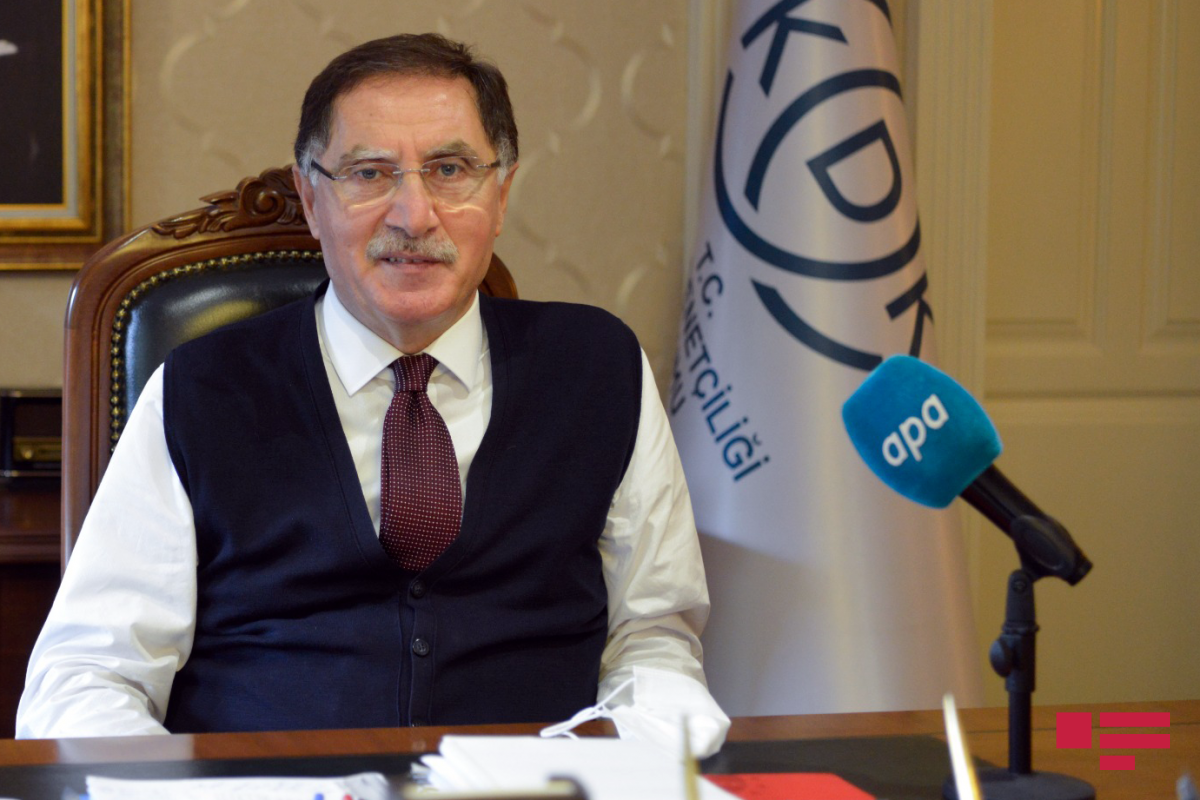 Interview of Chief Ombudsman of Turkey Seref Malkoc to APA

– You visited Azerbaijan during the 44-days Patriotic War and a report was prepared by the body, which was led by you, reflecting human rights violations by Armenia. You sent the relevant report to the diplomatic corps of foreign countries in Turkey, human rights, and ombudsman organizations. How was the reaction of the organizations, to which you presented the report?

– As you know, the mission of the Ombudsman institution includes keeping legal issues, as well as situations on human rights under control. Armenia shelled Ganja and other cities and districts of Azerbaijan – territories away from the war zone. Civilian Azerbaijanis were killed, injured as a result of these attacks. Houses were destructed, children became orphans.

Yes, we visited Azerbaijan during the war. Azerbaijani President Mr. Ilham Aliyev received us in Baku during the visit. Our meetings with the Ombudsman Sabina Aliyeva, Prosecutor General, Minister of Justice, Chairman of the  Constitutional Court have been held. We arrived at territories, destroyed as a result of missile strikes of Armenia, we visited families of the killed persons and the injured. We witnessed screams of people…

We prepared the report on the basis of documents, evidence, which we collected within a short period of time, translated it into the English language, and sent it to all human rights organizations in the world, including the UN, the International Criminal Court. Our step made a very good reaction. It was our humanitarian mission in the true sense of the word and we executed it.

On the other side, Azerbaijan and Turkey are brother countries. Certainly, there are wars, but we wish they would not. Armenia’s actions, which are away from humanity, should not be left unpunished. I think, being principal and insistent is required for it.

I should also note that most member countries of the Organization of Islamic Cooperation (OIC) Ombudsman Association have expressed their satisfaction. Gratitude letters have been sent to Turkey for the report from Australia to Southern America and other places of the world. The mission of legal organizations is to investigate incidents, violations of rights appropriately and on-site, to provide a spread of it in a correct form. Our aim is that. Unfortunately, Armenians have well organized in the international environment, they are especially active in Europe and America. They allocate many funds and spread false news. It should be prevented.

– You said that you submitted your report to the International Criminal Court. To what extent do you think it is possible to bring Armenia to international legal responsibility?

– To launch a trial based on claims in law and to get some results takes time. Because the law is not like other fields. It is necessary to investigate, gather evidence, prepare claims along with that evidence, and organize trials on this basis. It is true that the International Criminal Court operates a little bit slow, but it operates. The important thing here is to act in accordance with the mechanism of international law. Legal organizations like us, other governmental and non-governmental organizations, scientists should also be active in this issue.  This does not work that can be carried out by one organization. It is important that the issue should widely covered in the international media. This work demands to move forward with patience and persistently. The media usually takes an operative approach to an event and demands results, but the law is not like this. What is important in law is to make a principled decision. It is true that there is no need to be too late. In this regard, the Turkish Ombudsman Organization is fulfilling its duty fully.

– What do you think should be done to make the Turkic world more active in this issue?

– The Azerbaijani state was very well organized during the Second Karabakh War. Unlike Armenia, Azerbaijan displayed high culture in this war, did not harm the civilians on the other side, their homes. On the other hand, precise information was regularly disseminated in the European, American, Asian and African press. However, is that enough? I don't think that's enough. These mechanisms should be working constantly. For example, meetings on this topic can be organized in Baku, Ganja, Berlin, Paris, London, Washington to achieve successful results. Scientists, politicians, media representatives should be invited to these meetings. Because we see that to be right is not enough. Azerbaijan should resound to the world that it is right.

– Because of not providing mine maps by Armenia, civilians step on mines and die. In recent days, two Azerbaijani journalists have martyred in a mine explosion in Kalbajar, there were also injured. Armenian Colonel Koryun Gumashyan has admitted in his interview with the mass media that 17 truck mines have been planted in territories of the Lachin and Kalbajar region with the participation of himself and his soldiers. Despite all of these, Armenia yet rejects to provide landmine maps. What are your thoughts about this?

– I wish God's mercy to the martyrs and healing to the wounded. The liberation of the Azerbaijani territories from the occupation is an important part of the issue. But alongside this, landmine maps should be provided in order to ensure the safety and movement of IDPs in the liberated territories. How to believe Armenians? Maybe it is not 17 truck mines, even more than it. About 20 civilians have died in the mine explosion in Azerbaijan after the end of the war. It is killing people on purpose. How many innocent people will be killed yet?  Of course, there is punishment for this. If these maps are not provided, Armenia is responsible for those who died and injured there.

OSCE Minsk Group, which took the responsibility for the resolution of the Karabakh conflict, has not yet done anything. Meanwhile, Minsk Group has a lot of work to do for providing landmine maps by Armenia. All world should be alarmed because the world has a sensitive approach to the mining issue. It is not possible to solve this issue only with the support of the President of the Republic of Azerbaijan Ilham Aliyev, state bodies. There are diaspora organizations of Azerbaijan in every part of the world. Protest actions should be held in front of the UN, Armenian embassies. The events should be held in the capitals of the top 5 countries with veto power in the UN. These are not so difficult issues. It is also reflected in the Universal Declaration of Human Rights to announce that you are right and that you have suffered injustice. This is a democratic and legal right. Rightness is the most sacred concept, if your right is not recognized, then you need to prove it by force.  But if you say “I am right” and stand outside, no one will give you your right, the modern world requires this.

– Do Azerbaijani citizens living in your country have the right to appeal to the Turkish Ombudsman Organization for the protection of their rights?

– Alongside the Turkish citizens, every person who has not citizenship, may appeal to the Chief Ombudsman of Turkey as well. For example, in France, it is important to have citizenship in this country in order to appeal Ombudsman. In Great Britain, people may appeal to the Ombudsmanship through their lawyers.

But it is not like that in our country. More than 100 appeals have entered the Turkish Ombudsman Organization from the Azerbaijani citizens during a pandemic. The majority of those were the students. The appeals have been reviewed and legal support has been provided. Despite we are governed by separate state laws, we have a sensitive approach to the protection of the rights of our Azerbaijani brothers. 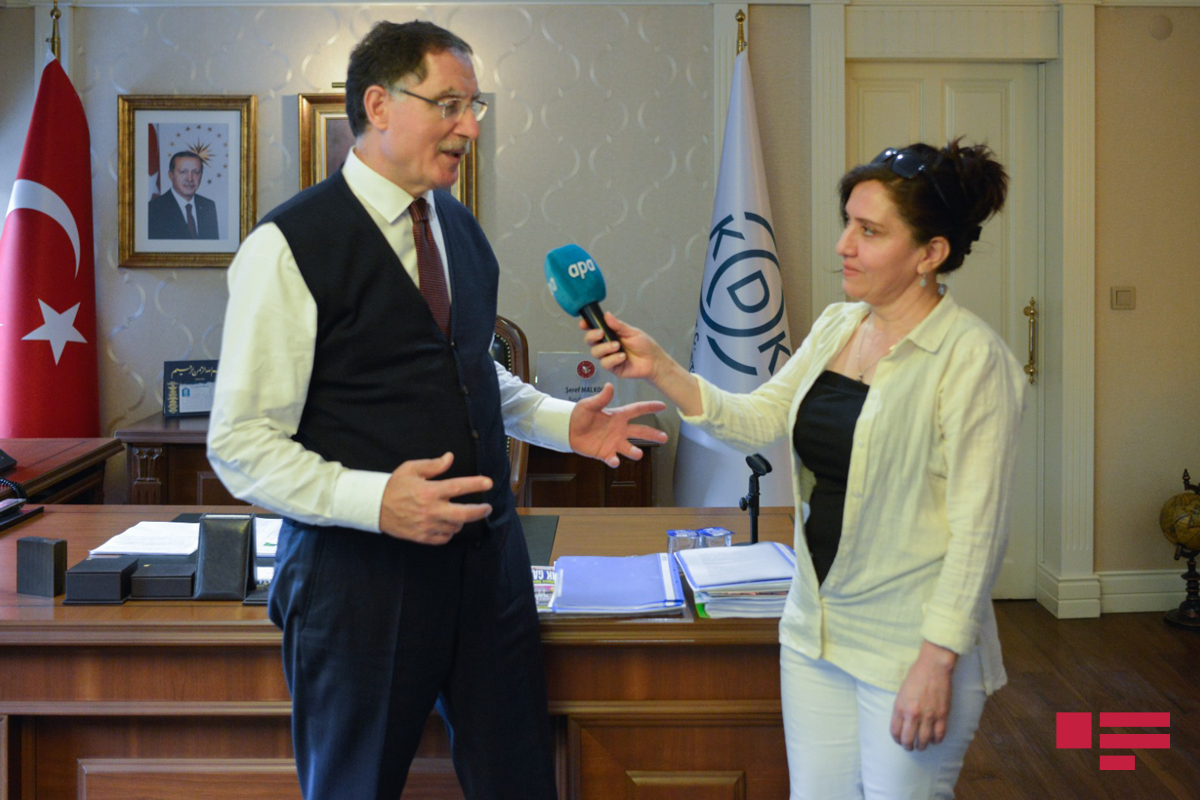