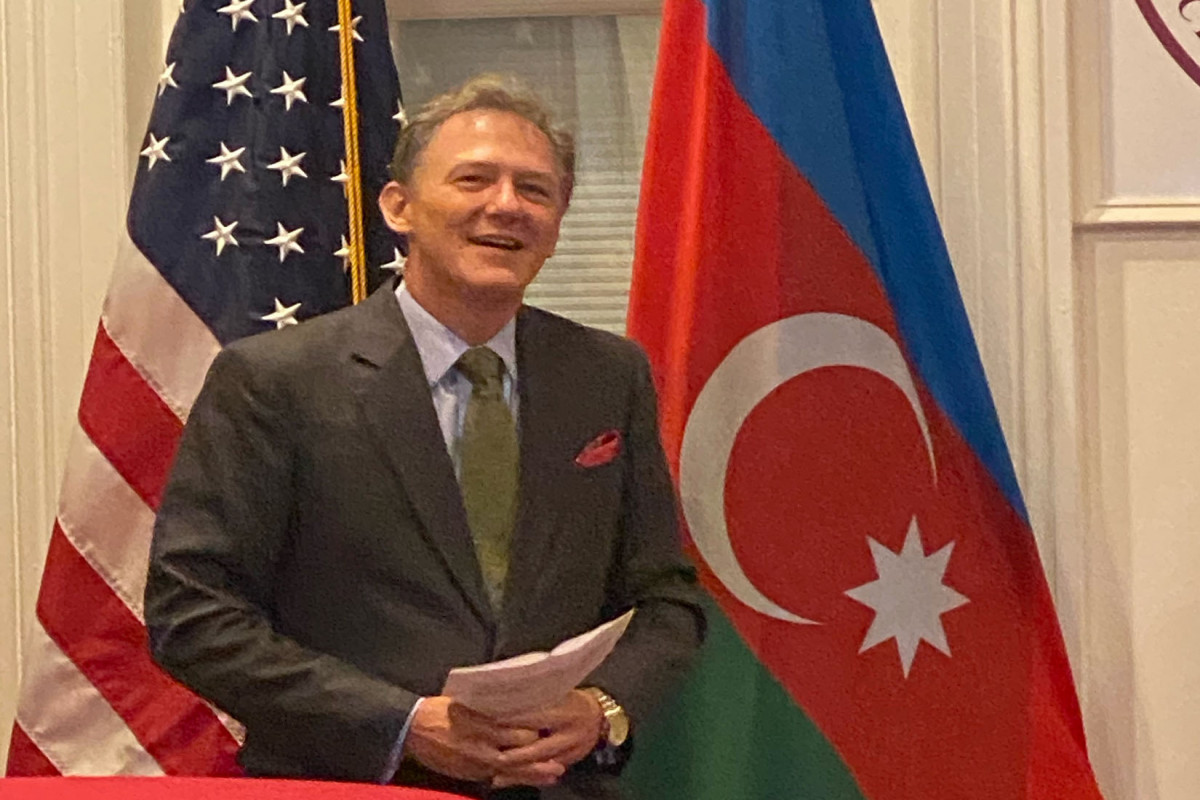 An official event was held in Washington on May 28 on the occasion of Republic Day with the participation of US government officials, the Azerbaijai Embassy in the United States told APA.

Azerbaijani Ambassador to the United States Elin Suleymanov, Chairman of the Board of the US-Azerbaijan Chamber of Commerce Reza Vaziri, US Deputy Assistant Secretary of State for European and Eurasian Affairs George Kent, US Deputy Assistant Secretary of Defense for Russia, Ukraine and Eurasia Laura Cooper, Head of the Mayor's Office of Protocol and International Affairs of Washington Patricia Elwood, representatives of the US State Department and Defense Department, officials of US companies and organizations, military attache and military attache of the Turkish Embassy in the United States, embassy staff and media representatives attended the event.

USACC Executive Director Natig Bakhishov greeted the guests and gave the floor to USACC Chairman Rza Vaziri to open the event. Reza Vaziri spoke about the historical significance of May 28 - Republic Day for Azerbaijan, and thanked the guests who attended the event

Ambassador Elin Suleymanov noted that May 28 - Republic Day is celebrated in Washington every year with the participation of about a thousand guests, but due to the coronavirus pandemic, it has not been possible to organize such an event in the last two years. He stressed that for the first time since March last year, such an event is held in Washington, which is attended by guests and is not virtual, and it coincides with the Republic Day. In this regard, he thanked the USACC for the opportunity to celebrate this significant day. Speaking about the importance of raising the Azerbaijani flag in Washington, the ambassador noted that May 28 was declared the National Day of Azerbaijan in Washington by the mayor, and thanked the mayor's office official who attended the event.

The ambassador said that for the first time in 30 years, independence was celebrated in the conditions of liberation of our occupied lands, and the elimination of the occupation factor created a very favorable opportunity for fundamental cooperation and good neighborly relations with Armenia.

Deputy Assistant Secretary of State George Kent congratulated the people of Azerbaijan on this significant day. He stressed the importance of the Republic Day event as the first non-virtual official event he attended since the beginning of the pandemic last year, and thanked for it.

He said that for the past 30 years, the United States has consistently supported Azerbaijan to be a successful, prosperous, secure and sovereign state. He expressed confidence that US-Azerbaijani relations would deepen in the future.

George Kent expressed satisfaction with the cooperation in the field of energy security over the past 30 years and said that the Southern Gas Corridor and other pipelines, which play an important role in the delivery of energy resources of the Caspian Basin to Europe, are fundamental to security. He spoke about the importance of the agreement between Azerbaijan and Turkmenistan on the Dostlug field in the Caspian Sea.

He said that the United States is thankful to Azerbaijan for its fight against terrorism and support in Afghanistan.

Speaking about the situation in the region after last year's war, George Kent said that the United States is ready to support the formation of regional cooperation, peace and progress, both bilaterally and as a co-chair of the Minsk Group.

Speaking later, US Deputy Assistant Secretary of Defense Laura Cooper extended her sincere congratulations on Republic Day and the 30th anniversary of our independence. He noted that independent, sovereign and democratic societies are the ones that are able to progress and grow in the best way. He stressed that during the independence of Azerbaijan, our countries have been cooperating on important strategic issues, energy security and the fight against terrorism. He thanked Azerbaijan for its unwavering support in Afghanistan over the past 20 years.

Laura Cooper also noted that this year marks the 18th anniversary of cooperation between Oklahoma and Azerbaijan under the State Partnership Program, and expressed satisfaction with this cooperation.

U.S. officials and guests have repeatedly stressed the importance of the Republic Day event as the first official meeting they attended after the pandemic.