President: "Azerbaijan has become one of Eurasia’s international transport centers" 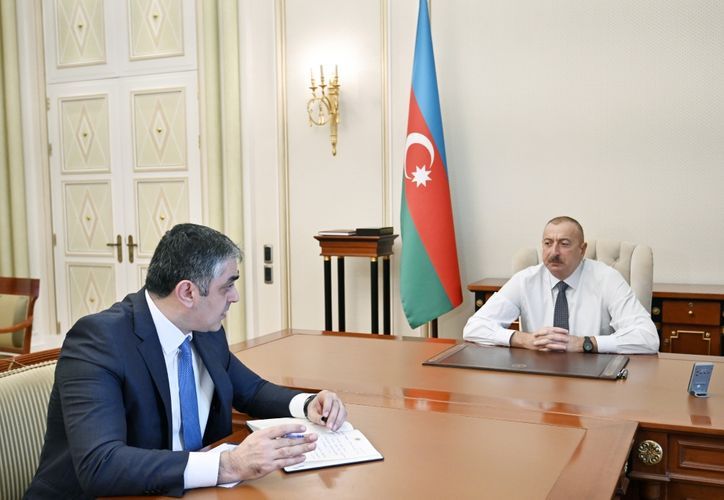 "As is the case with all other spheres in Azerbaijan, transport sector developed well last year. This development is manifested in real projects and is also reflected in the reports of international organizations. Suffice it to say that a record figure was reached in the construction of roads last year - 1,300 kilometers of roads were built. Thus, intercity traffic improved and the construction of trunk roads was continued. The roads of hundreds of schools were improved and reconstructed," said Ilham Aliyev, President of the Republic of Azerbaijan while received Minister of Transport, Communications and High Technologies Ramin Guluzade, on January 15, APA reports.

The Head of State noted that the Davos World Economic Forum has praised the work Azerbaijan is doing in the transport sector. In general, Azerbaijan’s transport infrastructure ranks 31st in the world according to the Davos report. "This is a fairly high indicator. In terms of this indicator, we are ahead of several developed countries. In terms of the quality of roads, we are in 27th place in the world. According to the efficiency of railway transport, we are in 11th place and for air transport in 12th place.

In other words, this essentially shows that the work recently done in the transport sector deserves the highest praise. Along with this, very important interstate projects were implemented last year. The commissioning of a new automobile bridge on the Azerbaijani-Russian border was a major event, because the previous bridge was built in the 1950s and had practically become unserviceable. The new bridge will serve the development of both transport and trade relations between Azerbaijan and Russia. At the same time, it is an integral part of the North-South transport corridor. Currently, a new highway is being built to the Russian border and the bulk of this highway will be commissioned by the end of the year.

In parallel, there are plans to build a new highway from Astara to the Iranian border. This issue has been agreed with the Iranian side. Thus, trucks will be able to directly move in the direction of Iran without entering Astara. In addition, a new automobile bridge will be built. A few years ago, a new railway bridge was built between the two countries, which is of great importance for the functioning of the North-South transport corridor.

Of course, more goods were transported along the North-South transport corridor last year. This is natural because there has been a lot of recovery in this direction since the commissioning of the Baku-Tbilisi-Kars railway. Goods are being transported not only from the eastern direction, but also from Russia to Turkey and Europe through the territory of Azerbaijan, and the volume of cargo will grow every year. Thus, Azerbaijan, which does not have access to the world ocean, has become one of Eurasia’s international transport centers."