After Pashinyan, Mnatsakanyan also was ashamed on famous TV channel 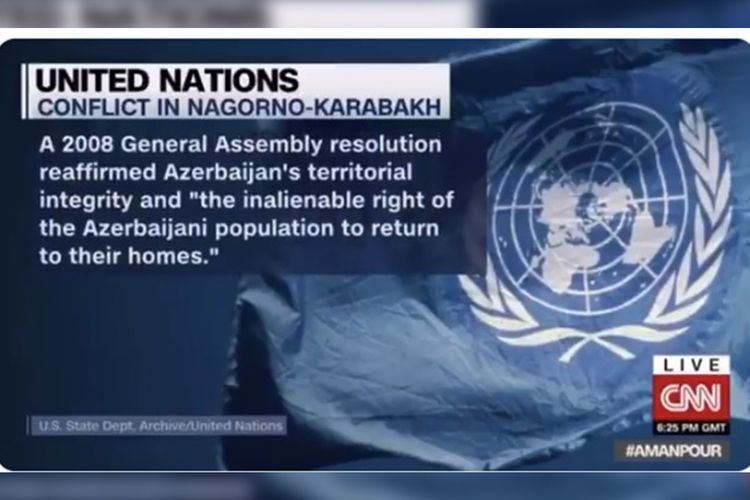 Armenia’s minister of foreign affairs Zohrab Mnatsakanyan gave interview to CNN after his meeting with the US state secretary Mike Pompeo on October 23, APA reports.

Mnatsakaryan who was guest of the renown female TV presenter Christian Amanpour was powerless in front of the difficult questions addressed to him. In the beginning of the interview he tries to find excuse by every means in order to defend Armenia blatantly violating humanitarian ceasefire and committing aggression against civilian persons. But Christian Amanpour interfering Mnatsakanyan’s speech several times, specially noted the four resolutions of the UN Security Council demanding immediate withdrawal of the occupational forces from the Azerbaijani territories.

At the same time, Mrs. Amanpour reminded the Armenian minister the adopted of the resolution entitled as “Situation in Azerbaijan’s occupied territories” at the meeting of the UN General Assembly with a large number of participants on March 14, 2008.

We would like to tell for your information that this resolution consisting of 9 items once again expresses the principal position of the UN General Assembly regarding the Armenia-Azerbaijan Nagorno Garabagh conflict. This document supports territorial integrity of the Republic of Azerbaijan within its internationally recognized borders, demands complete and unconditional withdrawal of Armenia’s forces from all occupied territories, reflects necessity of creation of relevant condition for return to their native land of the Azerbaijanis who became internally displaced people.

The Armenian minister lost himself in front of this question of the female TV presenter and similarly to prime minister Pashinyan who got into difficult situation during his interview with BBC some time ago, he tried to change the topic. The next question of the TV presenter also brought the Armenian minister into desperate situation. Christian Amanpour reminded the “Garabagh is Armenia” statement of Armenia’s Prime minister Pashinyan openly reflecting Armenia’s occupational policy. She asked the Armenian minister what this nationalist and provocative statement of Pashinyan was calculated for. The female TV presenter saying “Can this statement be understood as Armenia’s wish to annex Garabagh?” required the minister to give explanation. While Mnatsakanyan once again evaded answering the question. He claimed that by making such statement Pashinyan only thought about “the role of Armenia in security of Armenians in Nagorno Garabagh”. This absurd answer voiced from mouth of Zohrab Mnatsakanyan once again revealed that the official Yerevan is conducting the coward policy.

Armenia’s minister of foreign affairs who plunged in difficult situation on live broadcast of CNN in fact confessed that the prime minister saying “Garabagh is Armenia” made insincere and distorted statement contradicting with international laws. Remind that some time ago, Armenia’s prime minister Nikol Pashinyan being a guest of HardTalk TV show broadcasted on BBC TV channel also faced the similar situation. He also was ashamed when answering the objective questions reflecting the truth regarding the Nagorno Garabagh conflict asked by TV presenter Stephen Sackur at the show.