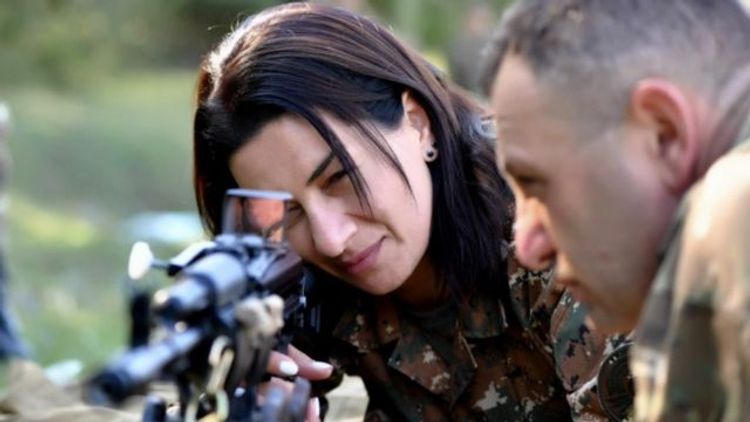 An article, which deals with provocations of the wife of Armenian Prime Minister Nikol Pashinyan Anna Hakobyan in occupied territories of Azerbaijan and entitled “Hakobyan prepares Armenian women for an attack on Azerbaijani civilians", has been published on Italian media, APA reports citing Eurasianews.

It has been noted in the article that although special violation cases are not currently observed on the state border of Azerbaijan and Armenia and line of contact between troops of both countries after the July events, there are some concerning points regarding the Armenian-Azerbaijani Nagorno Garabagh conflict.

“Wife of Armenian PM Nikol Pashinyan Anna Hakobyan, who is famous for her economic-financial machinations with her husband on media in recent months, presented herself as a peace defender in the region in 2018 and invited Azerbaijani women to join “Women for Peace” campaign too. However, after just a year and a half, news has been disseminated on the participation of Anna Hakobyan in military exercises in Azerbaijan’s Nagorno Garabagh region that is under Armenian occupation for more than 30 years with her so-called “peaceful women”. She forgets calls for peace, ignores the existence of villages, settled by Azerbaijani civilians nearby the exercise territories, and invites women to defend Nagorno Garabagh by using weapons. Photos, taken from the exercise sites, prove both the revolutionary dictatorship of Nikol Pashinyan and content of Armenian military aggression. If Armenian women also prepare for a war, how can peace willing of this country be believed?

The July incidents and such actions of the Armenian women once again confirm the words of Armenia’s Defense minister who said before the July incidents and growth of violence in Tovuz region due to Armenia’s attack against Azerbaijan “Armenia is ready for a new war for new territories”, is noted in the article.