Assistant to Azerbaijani President: France does not have the authority to speak on behalf of the OSCE Minsk Group co-chairs 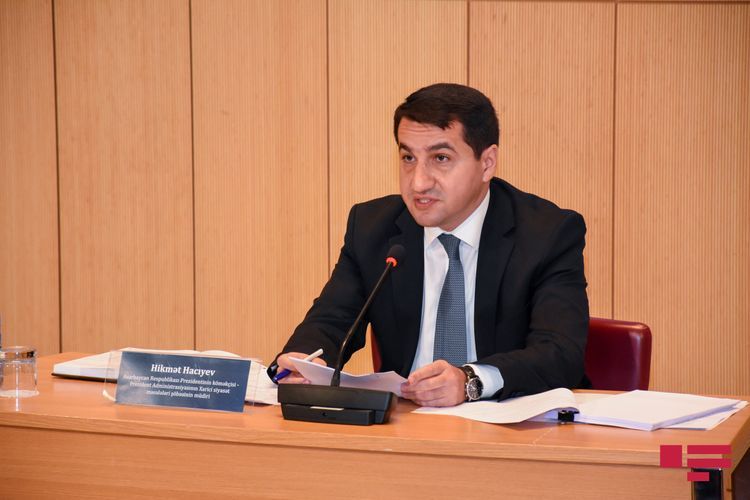 “French officials voice unilateral, biased and non-objective statements against France's mandate as co-chair of the OSCE Minsk Group. While France should act as a neutral party in accordance with its mandate, it pursues a pro-Armenian policy obviously and makes completely groundless accusations against Azerbaijan,” said Hikmet Hajiyev, Assistant of the President of the Republic of Azerbaijan, Head of Foreign Policy Affairs Department of the Presidential Administration, APA reports.

H. Hajiyev said that French did not have any role in the adoption of a joint statement of the Presidents of Azerbaijan and Russia and Prime Minister of Armenia: “Probably, France is jealous of Russia’s role in this issue. Armenian Prime Minister’s signing this document says all. Now France attempts to be Armenian much more Armenians. France does not have any authority to speak on behalf of OSCE Minsk Group co-chairs.

As a co-chair of OSCE Minsk Group France has not taken any step in order to eliminate Armenia’s ongoing occupation against Azerbaijan and implementation of the UN Security Council resolutions, now demonstrates assiduousness unilaterally. I wonder if France has ever worried about the non-returning Azerbaijani IDPs to their lands during these 30 years? However, contrary to this, the liberation of Azerbaijani lands from the occupation, and ensuring the rule of international law continues to concern France. At the final, I would like to remind official bodies of France that the name of Shusha city which is the historical land of Azerbaijan and which has a special place in the heart of Azerbaijani people and liberated from the occupation, is not “Shushi” but “ Shusha.”