Assistant to Azerbaijani President: “Hatred of Azerbaijanis is openly propagated in Armenia” 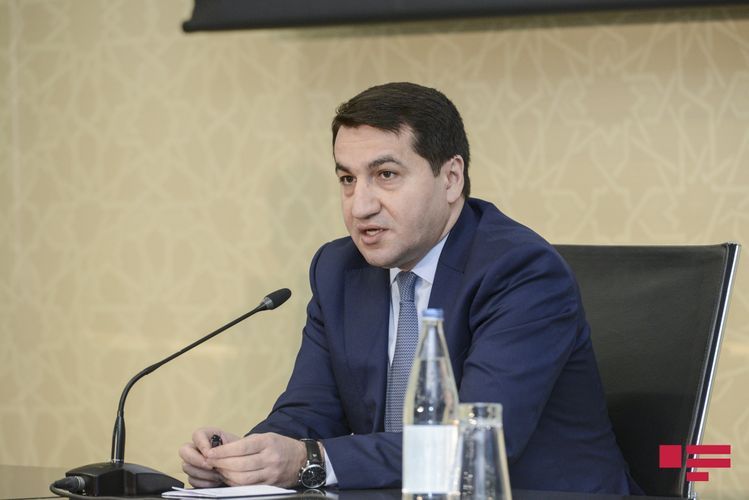 “The strategy clearly shows the presence of Azerbaijanophobia in Armenia. Hatred of Azerbaijanis is openly propagated in this country,” said Assistant to the President of Azerbaijan, Head of Foreign Policy Affairs Department of the Presidential Administration Hikmat Hajiyev as he commented on Armenia’s new national security strategy.

Assistant to the President said that the document dwells upon the far-fetched massacres against the Armenians allegedly committed by the Azerbaijani side: “Ganja is described as Gandzak. Such claims of the country that has committed a genocide and atrocities against the Azerbaijanis, destroyed our heritage and changed place names in Armenia and the occupied territories are true hypocrisy.

The strategy notes that there is no place for violence and xenophobia in Armenian society. In fact, however, Armenia has itself ousted more than a million Azerbaijanis from its territory and the occupied lands. Armenia is a country that has destroyed mosques, historical sites and graves. Xenophobia has reached such a level that the architectural features and essence of the Blue Mosque in Yerevan and the Yukhari Govhar Agha Mosque in Shusha have been changed and they are portrayed as Iranian monuments. Armenia has destroyed the grave of great Azerbaijani poet, ashiq Alasgar. The former Armenian president said in the center of Europe in 2003 that “the Armenians and the Azerbaijanis are ethnically incompatible”.

The document states that the Armenians are victims of the first “genocide” of the 20th century and that Armenia pays special attention to the topic of preventing genocide at the international level. This is yet another lie. Armenia has itself committed an act of genocide against the Azerbaijanis in Khojaly at the end of the 20th century,” the Assistant to President of Azerbaijan stressed.