Azerbaijan's MFA Spokesperson comments on statement of the Armenian FM 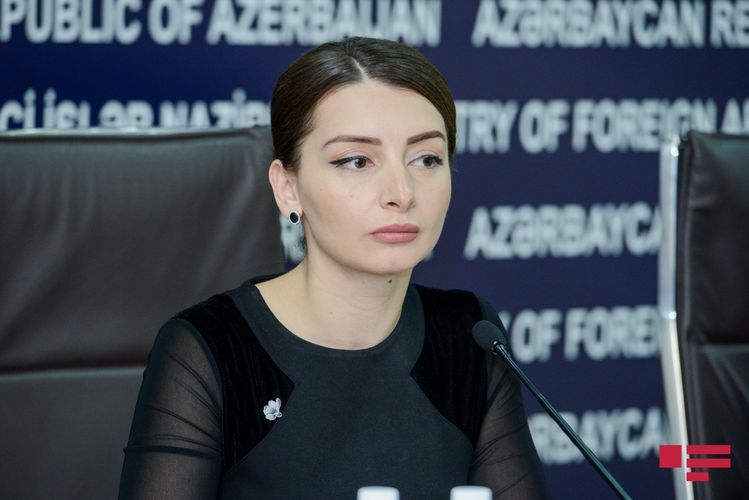 Spokeswoman for Azerbaijan's Foreign Ministry, Leyla Abdullayeva, has commented on the statement of Armenian FM which voiced regarding the talks on the settlement of the Armenian-Azerbaijani Nagorno-Karabakh conflict during a video conference held by Russian Foreign Minister Sergei Lavrov on April 21, APA reports.

According to L. Abdullayeva, the foundations of the new world order were laid after the Second World War and enshrined in the UN Charter of 1945, the Helsinki Final Act of 1975 and the Paris Charter of 1990: "The norms and principles of international law find their explanation in all these fundamental documents, including the principles of sovereignty, territorial integrity and self-determination of peoples. Both Azerbaijan and Armenia are full-fledged participants in these documents, having committed themselves to their impeccable compliance. We recall once again that participating States should refrain in their actions from the threat or use of force against the territorial integrity or political independence of any state. We also emphasize once again that, with regard to the principle of self-determination, member states must act in accordance with the goals and principles of the UN Charter and relevant norms of international law, including those that relate to the territorial integrity of states, as set out in the above-mentioned Helsinki Final Act and then reaffirmed by the Paris Charter.

Regarding the conflict between Armenia and Azerbaijan, it was the Republic of Armenia, in violation of its aforementioned obligations, used military aggression against neighboring Azerbaijan, occupied 1/5 of the internationally recognized territories of Azerbaijan and subjected more than a million Azerbaijanis to ethnic cleansing. Under these circumstances, the Foreign Minister of the aggressor country, that is, Armenia, obnoxiously declares the problems of security and free expression of will. What kind of security can be talked about under the conditions of military occupation? The very fact that one state occupies the territory of another state is a constant source of a security threat. It is impossible to talk about the security and free will of the population of Karabakh when its third part is forcibly expelled from their places of permanent residence and for about 30 years deprived of the opportunity to return to their homes and participate in a free expression of the will concerning the future of their region.

As for the well-known commentary by Russian Minister of Foreign Affairs Sergey Viktorovich Lavrov on April 21 regarding a step-by-step approach to the settlement of the Armenia-Azerbaijan Nagorno-Karabakh conflict, I can only note that this position is confirmed by all co-chairs of the OSCE MG, which they repeatedly and consistently voiced at all levels and stages of the conflict resolution process.

It should be remembered that this occupation is temporary. And the sooner Armenia realizes this and stops engaging in self-deception, deceiving its own population and trying to mislead the world community, the more chances the country will have to avoid further bloodshed and aggravation of its already depressing situation."