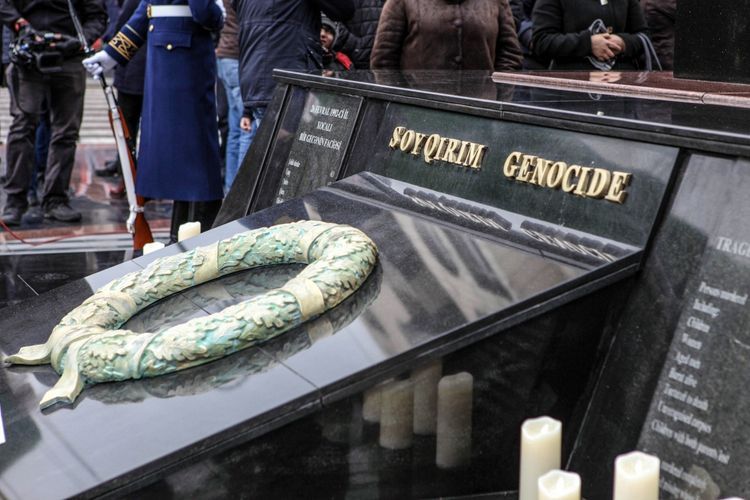 Azerbaijan’s Ombudsman has disseminated a statement regarding the 28th anniversary of Khojaly genocide, APA reports.

The report says citing the statement that on the night of February 25 to 26, 1992, in continuation of the occupation and ethnic cleansing policy implemented by Armenia against Azerbaijan for many years, the Armenian armed forces assisted by the 366th motorized rifle regiment of the USSR occupied Azerbaijan’s Khojaly City and committed genocide against the civilian population. During this genocide, 613 people including 106 women, 63 children and 70 elder people were killed with extreme brutality and 487 people sustained bodily injuries of varying degrees due to their ethnic affiliation – their being Azerbaijanis. Meanwhile, 8 families were completely killed, 130 children lost one of their parents, and 25 children lost their both parents. 1275 people were taken prisoner and hostage and were subjected to tortures, and the fate of 150 of them including 68 women and 26 children is unknown up to now. Besides, the damage amounting to over US$ 170 million was caused to the Azerbaijani state and citizens due to occupation of Khojaly City.

It is also noted in the statement that according to the UN Convention “About prevention and punishment of genocide crime” the genocide perpetrators should be punished according to the legislation: “In order to achieve the implementation of the principles declared by the UN during adoption of its Statutes 75 years ago and the Sustainable Development Goals targeting the world’s development until 2030, the provisions of the conventions adopted by this reputable international organization, as well as the Resolutions of the UN Security Council must be unconditionally implemented, the territorial integrity of Azerbaijan must be restored, over one million refugees and internally displaced persons must return to their native lands, the war prisoners and civilian hostages must be set free, and the justice for Khojaly must be ensured”.