Azerbaijani Foreign Minister: "Armenia’s persistent attempt to put forward the issue of status is a blow to the peace process" 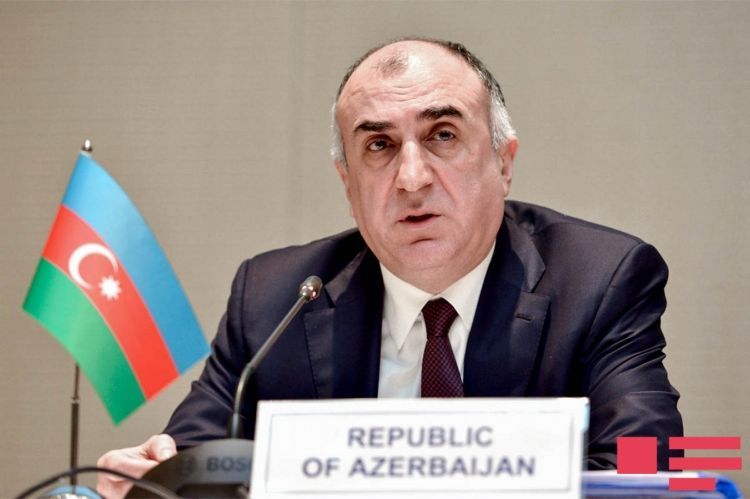 "Since the last Ministerial Council, we have only managed to agree and implement certain measures in humanitarian sphere, like mutual visits of journalists from Armenia and Azerbaijan that took place two weeks ago. However, such moves cannot produce any tangible result, if the political process remains stagnated. They cannot be a substitute to substantive negotiation process," said Elmar Mammadyarov, Azerbaijan’s Minister of Foreign Affairs during his speech at the 26th session of Ministerial Council of OSCE in Bratislava, Azerbaijani Foreign Ministry told APA.

"The position of Azerbaijan towards the resolution of the conflict is consistent and is reflected in the Memorandum that was distributed among participating States at this Ministerial Council (SEC.DEL/575/19). Let me remind, that the conflict resolution process is based on a step-by-step approach. This approach has no alternative because it is based on the related UN Security Council resolutions and the OSCE decisions, in particular the Budapest Summit decision of 1994, which form the only legal framework for a political settlement of the conflict.

The first step shall be the elimination of the major consequences of the conflict, thus ensuring immediate, complete and unconditional withdrawal of the armed forces of Armenia from the Nagorno-Karabakh region and other occupied territories of Azerbaijan, to be followed by the return of the displaced Azerbaijani population to their homes and properties in safety and dignity, including into the Nagorno-Karabakh region, opening of all communications in the region for mutual use and rehabilitation and economic development of these territories.

Withdrawal of Armenian troops from Azerbaijani lands will provide a good opportunity to elaborate and define the status of self-rule for the population of the Nagorno-Karabakh region within Azerbaijan, in accordance with the Constitution and legislation of Azerbaijan. Such a status must ensure peaceful coexistence of the Armenian and Azerbaijani communities of the region and guarantee full enjoyment by all of human rights and fundamental freedoms on an equal and non-discriminatory basis.

The definition of the status shall take place in peaceful conditions through a legitimate process with direct, full and equal participation of the population of the Nagorno-Karabakh region of Azerbaijan, namely, the Armenian and Azerbaijani communities, and in their interaction with the Government of Azerbaijan exclusively in the framework of the Constitution of the Republic of Azerbaijan.

Armenia’s persistent attempt to put forward the issue of status is contrary to the decisions of OSCE endorsed by the UN Security Council resolutions and essentially is a blow to the peace process and to the mandate of the Minsk Group Co-Chairmen.

The resolution of the conflict is possible only on the basis of the sovereignty and territorial integrity of Azerbaijan within its internationally recognized borders. The military occupation of the territory of Azerbaijan does not represent a solution and will never produce a political outcome desired by Armenia.

Azerbaijan remains committed to the conflict settlement process based on this understanding," said minister.