Azerbaijani President: "If Armenian fascism rises again, they will receive 10 times more and no-one can stop us" 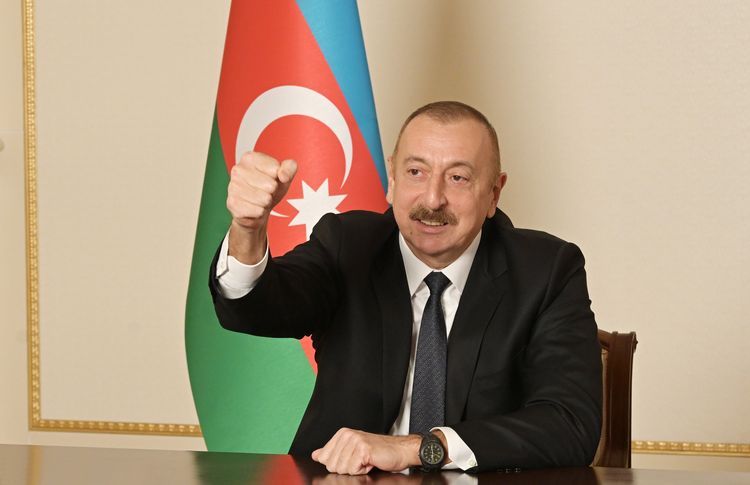 "As for yet another fabrication made by Armenia today, I want to clarify that as well. It is claimed that 90,000 Armenians fled Nagorno-Karabakh and became refugees. It is a lie," said President of the Republic of Azerbaijan Ilham Aliyev in his address to the nation on the occasion of liberation of Aghdam, APA reports.

"A maximum of 60,000-65,000 people lived in Nagorno-Karabakh and our occupied lands before the Second Karabakh War. Where did we learn that? We have operational information. We have many sources of information in that region, and this is one of the reasons for our success. We knew exactly and we know what is happening there now, where the head of their junta is hiding. He was probably aware too that we knew that. This is why he couldn't take his nose out and sat in the bunker. We have objective information, we have sources, we have satellite images. Therefore, I say with full confidence that a maximum of 65,000 people lived in Nagorno-Karabakh, including the occupied territories. So where did 90,000 refugees come from? Another lie, another fraud. Now they will cling to others, asking and begging for help. “Help me” is the core principle of their ideology. What nation can develop with this ideology? Who has ever benefited from expecting and begging, and then taking offence and putting forward demands?

We will expose these lies about the number of refugees, and even if there were refugees, it is not our fault. We did not fight against the civilian population. They are the ones who fought against our civilian population. We have 94 martyrs among civilians and more than 400 wounded civilians. More than 3,000 houses have been destroyed. Their losses among civilians are much lower. However, they targeted our civilians in cities and villages. Ganja was hit by ballistic missiles. They hit Barda with cluster bombs, with phosphorus bombs. This is a war crime. The city of Tartar is almost destroyed. The largest number of shells fell on Tartar. Every morning, I was told how many shells landed there. One day, two thousand shells fell on a small town. Isn't this Armenian savagery? Isn't it a repeat of the Khojaly genocide? See who we were faced with and who we defeated? I repeat: we have not only restored our territorial integrity, we have also broken the back of Armenian fascism. We have saved the region from Armenian fascism, we have saved the world from Armenian fascism. It may resurrect but we will not allow that to happen. Everyone should know that. We will take any steps necessary to defend ourselves. We will take any steps necessary to protect our citizens, and no-one can stop us. The whole world saw that in 44 days. No-one can stand in front of us or put forward conditions to us. In the early days of the war, representatives of the countries that wanted to impose conditions on us, to threaten us, to slander us, some Western countries – they received our harsh response. They saw that we were not a country that bows to others. Neither am I a leader who accepts everything, any word. I have responded to them with a vengeance and will continue to do so if necessary. Therefore, if Armenian fascism rises again, if any provocation is committed against us, they will receive 10 times more and no-one can stop us," noted Azerbaijani President.