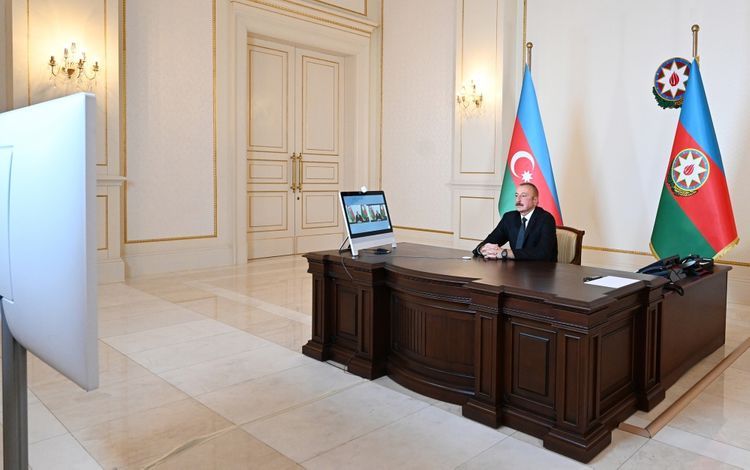 Military operations conducted by Azerbaijan in order to liberate the territories occupied by Armenia is the main subject of the agenda of Russian society. The majority of  political talk shows broadcasted in Russian federal TV channels have been dedicated to Armenia-Azerbaijan, Nagorno- Garabagh conflict. Circulation of "fake" information disseminated by the Armenian side from the beginning of the military operations by the Russian media which is under the strong influence of Armenian lobby ended by Azerbaijani President Ilham Aliyev’s interview with “Rossiya 1” TV channel. 12-minute speech of Azerbaijani President Ilham Aliyev on “60 minutes” tv program, broadcasted in “Rossiya 1” TV channel, which is  considered the most rated talk show of the country, or rather, responding to the questions of presenters of the program, has put an end to the attempts of Armenia, as well as Armenian lobby in Russia to deceive Russia and the world community. Armenia’s in the words of Russian journalists, political and military experts, theses "Mercenaries from Syria are fighting in Karabakh by Azerbaijani side", "Turkish army supports Azerbaijan", "Azerbaijan started a war at the instigation of Turkey", "Russia should intervene in this conflict"  have been overturned by the detailed and factual arguments of the President of Azerbaijan.

If we pay attention to the questions of presenters of the program addressed to President Ilham Aliyev, we can clearly see that those questions are formed from the theses that I listed above.

The President of Azerbaijan lent clarity in successive and detailed way to such questions as “Turkey’s role in military operations”, “The “shooting down” of military aircraft belonging to Armenia by Turkey’s F-16 fighter jet”, “Mercenaries brought from Syria are fighting on the Azerbaijani side”. He said all these are the fake news disseminated by the Armenian side.

President Ilham Aliyev stressed that the aim of Armenia in spreading such false news is clear: “Firstly, its aims to artificially decrease combat capability of the Azerbaijani Army that is honorably performing now its duty of restoration of our territorial integrity, as well as to create such a perception that the conflict is expanding, the third countries are being involved in it and thus to try to attract as many countries as possible in order to get its provocation justified. Therefore I responsibly declare to you that Turkey is not a party to the conflict, doesn’t participate in the conflict in any form and there is not a necessity in this”.

The answer of Ilham Aliyev to the saying “No, there is not. This is another piece of fake news. There is no any mercenary from Syria. There is no any evidence, any proof in this regard. This has been put forward by the Armenian propaganda and is circulating on various websites, various mass media outlets. There is even no need in this. Azerbaijan has well-prepared army, very large conscription reserve. Yesterday, I announced partial conscription. We are calling into army ten thousands of military servicemen being in reserve from our population totaling to 10 million against Armenia having 2 million population, we don’t have a need in human resources” to the TV presenter’s question saying “Are there mercenaries from Syria on the front currently?” has created a slap effect in the whole pro-Armenian Russian media using this as a thesis.

President’s “we are able to punish the aggressor so that he doesn’t venture even to look in our direction” statement was a statement, addressed to the whole Armenia and world Armenian lobby.

Opinions, voiced by Azerbaijani President during the interview, arguments, basing on reasonable facts satisfied political expert sphere of Russia too. It was possible to see it especially in the background of foolish explanation, groundless statements of Armenian Prime Minister Nikol Pashinyan after Azerbaijani President. Every word of Pashinyan in his speech was false. “Turkish fighters are participating in operations” – false, “Armenian territory is bombed” – false, “Syrian fighters take part in military operations, conflicts have already appeared among Azerbaijani people and them” – ridiculous false. Armenian PM’s speech based not only false, but also call for Moscow to "intervene in the conflict" was also evident in the speech. If we pay attention to the mimics of presenter and political and military experts in the studio during Pashinyan’s speech, then reaction to the Armenian Prime Minister’s making a fool of either himself, or Russian community.

Let's pay attention to the opinions of Russian experts on the speeches of the leaders of Azerbaijan and Armenia following the "60 Minutes" program.

Well-known military-political expert Igor Korotchenko attneded the talk show, shared a post on his Twitter page, which has hundreds of thousands of followers, once again demonstrates the effect of President Ilham Aliyev's speech for twelve minutes.

I.Korotchenko declared that Ilham Aliyev had destroyed Pashinyan with his speech and wrote, "Look, this is the MSU school."

The comment "A great diplomat. Great school. Serious and measured answers”  made by Russian TV presenter Vladimir Solovyov, who is known for his strong pro-Armenian stance while speaking about the speech of the President of Azerbaijan on the talk show "Evening with Vladimir Solovyov" broadcasted last night should not be beyond focus.

In short, with a 12-minute speech on Russian television yesterday, the President of Azerbaijan gave a consistent respond to the provocative and false information spread by Armenia in order to deceive Russia and the world community.

It should also be considered part of the combat for justice on the Nagorno Garabagh front by the Azerbaijani Army.