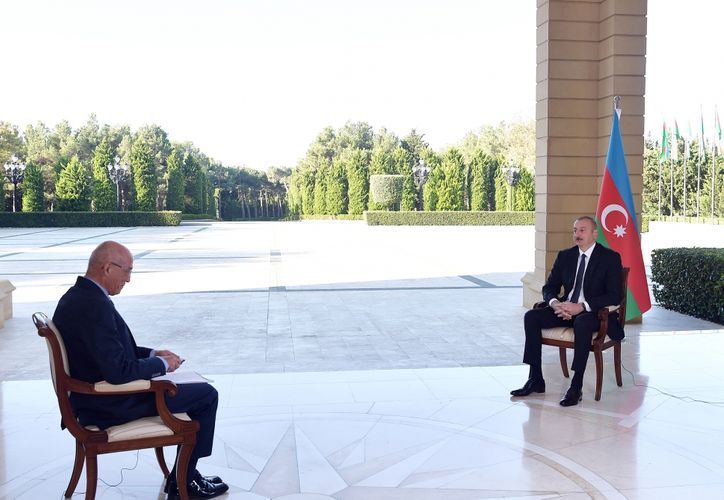 “So far the issues in this regard in our bilateral relations haven’t been discussed”, said today President Ilham Aliyev in his interview with Turkey’s NTV television channel when answering the question about possibility of establishment of Turkey’s military base in Azerbaijan, APA reports.

The head of state said we have the very wide base of legal documents with Turkey: “The contracts signed by us in a number of spheres are in force. There are also the clauses in those contracts about cooperation and mutual assistance in the military sphere. This is our right. If a very serious danger emerges for Azerbaijan, of course, Turkey is our ally and we can use these potentials. But no discussion has taken place regarding establishment of Turkey’s military base in Azerbaijan”. President Ilham Aliyev noted that our cooperation in the military sphere has been strengthening from year to year: “Just during the last year, 10 joint military trainings were held. This year, a little break was taken due to coronavirus and the trainings were held only two times. But these military trainings also caused great concern in our region. I think there is no any reason, ground for such concern. Because these trainings are not the trainings that bear the character of preparation against any country. These trainings bear such meaning as strengthening of our cooperation in the military sphere, improvement of the Azerbaijani Army, bringing it closer to standards of the Turkish Army and study of Turkey’s positive experience in the area of military building. Therefore, sufficient volume of information regarding Turkey’s military base has been published in the international media from the end of September until now. This doesn’t have any ground. The Turkish-Azerbaijani cooperation is so strong, is so widely diversified that we stand by each other at any moment. Irrespective of existence or non-existence of the base, we trust in Turkey, and Turkey trusts in us”.