Azerbaijani President: More than 80% of armed forces in the occupied lands are Armenian soldiers - UPDATED - VIDEO 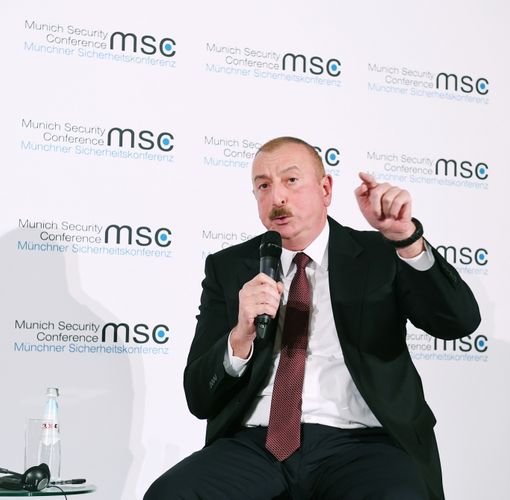 After the Armenian Prime Minister distorted the historical facts, the President of Azerbaijan ended the debate so: "I will not talk about the fact that in Erevan 70 percent of the population were Azerbaijanis at the beginning of the 19th century. I will not talk about that. On self-determination - that is what they always talk about. Armenian people self terminated themself. They have Armenian state. My advice is to find other places in the world to self determinate them for the second time. Not in Azerbaijan".

“All Armenian leaders tried differently to hold the status quo. Azerbaijani IDPs should return back to their territories. More than 80% of armed forces in the occupied lands are Armenian soldiers. They think that they can keep these territories forever. Never,” said Azerbaijani President Ilham Aliyev at the panel discussions on the Armenia-Azerbaijan Nagorno-Karabakh conflict held as part of the Munich Security Conference, Assistant to the President of the Republic of Azerbaijan Hikmat Hajiyev twitted.

“We need to resolve this conflict in phases, liberation of part of territories and return of IDPs. Status of Nagorno-Karabakh can be defined later. Status must not interfere with the territorial integrity of Azerbaijan,” the head of state added.