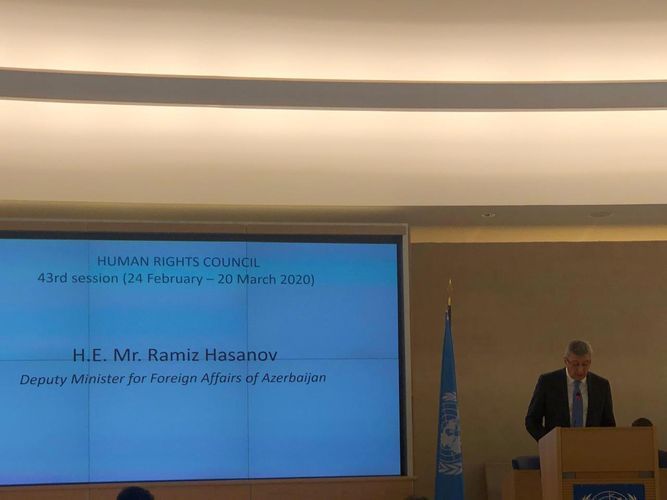 "This year the United Nations marks its 75th anniversary. Tackling issues such as intolerance, hate speech, migration, forced displacement and climate change demonstrates still irreplaceable value of the UN and at the same time the need for a stronger Organization.  Azerbaijan advocates for an efficient UN and is committed to increased co-operation with the OHCHR," said Ramiz Hasanov, Deputy Minister of Foreign Affairs of the Republic of Azerbaijan while his speech at the High Level Segment of the 43rd Session of the United Nations Human Rights Council, APA reports citing the press service of Azerbaijani Foreign Ministry.

He stated that in recent years we have strengthened our partnership with the Office. My country is also actively engaging with the Human Rights Council, including its special procedures mandate holders. In order to support the important work of the Office to deliver necessary technical assistance, Azerbaijan will increase the amount of its voluntary contribution this year: " Azerbaijan has assumed the Chairmanship of the Non-Aligned Movement at its recent Summit held in Baku. During its Chairmanship Azerbaijan will build its priorities around the Bandung principles and in particular will continue advocating for the universality, indivisibility and interdependence of all human rights. We also emphasize the importance of adopting a constructive approach to the promotion and protection of all human rights and fundamental freedoms, and in this regard encourage all States to focus on genuine dialogue and cooperation with each other."

"Ambitious and long-ranging reforms are presently carried out in Azerbaijan aimed at further strengthening of democracy, rule of law, and promotion and protection of human rights. The parliamentary elections of 9 February 2020 constitute another important step towards further democratic development of Azerbaijan. The elections involved the highest number of registered candidates, including a significant increase in the number of women candidates. As it has been done also in previous elections, 523 polling stations were set up to ensure the voting rights of 700,000 IDPs forcibly expelled from their territories as a result of the Armenian aggression against Azerbaijan and thus deprived of a possibility to vote in their home towns. The Azerbaijani citizens of Armenian origin living in the occupied Nagorno-Karabakh region of Azerbaijan were invited by Azerbaijani election authorities to vote, and a number of them have participated in the parliamentary elections of 9 February by e-voting.

Yesterday this Council was again abused by the Armenian foreign minister with many falsifications concerning the Armenia-Azerbaijan Nagorno-Karabakh conflict and aimed at justifying Armenia’s annexationist policy towards Azerbaijan in blatant violation of international law, including the UN Charter. It is this policy that constitutes the real root cause of the conflict.

Armenia disregards the relevant UN Security Council Resolutions and documents of other international organizations, which reaffirm the sovereignty and territorial integrity of Azerbaijan, and condemn the use of force by Armenia against Azerbaijan, the occupation of its territories, the attacks on civilians, and demand the immediate, complete and unconditional withdrawal of all occupying forces from the areas of Azerbaijan.

Today Azerbaijan commemorates the 28th anniversary of one of the darkest pages of the Armenia-Azerbaijan Nagorno-Karabakh conflict – the Khojaly Genocide recognized by an increasing number of countries. It was on this day in 1992, that 613 residents of this small town in the Nagorno-Karabakh region of Azerbaijan were brutally killed by Armenian military simply because they were Azerbaijanis – the fact that has been later admitted by the then president of Armenia himself. In this regard, Azerbaijan urges the Council, its mandate holders and the High Commissioner to take a principled stand and efficient actions for restoration of human rights of Azerbaijani IDPs and refugees which remain violated for almost 30 years.

Armenia deliberately misrepresents the principle of self-determination calling for its application only for Armenian ethnic group living in the occupied Nagorno-Karabakh region of Azerbaijan, and deliberately concealing the fact that all Azerbaijanis have already been expelled by Armenia from this region through the use of force. Therefore, there is no such notion as a “people of Nagorno-Karabakh”, but there is an Armenian community of Nagorno-Karabakh, alongside with the Azerbaijani community of the same region. Under these circumstances holding the so-called “elections” in the Nagorno-Karabakh region of Azerbaijan violates the international law. Such elections have never been recognized by the international community in the past and will continue to be rejected.

Despite Armenia’s declarations of its “commitment” to peaceful resolution of the conflict, the apparent lack of genuine interest by the leadership of Armenia impedes the conflict resolution process. In response to the false allegations of Armenia on this conflict made at the recent Munich Security Conference, the President of the Republic of Azerbaijan unequivocally stated there that any solution to this conflict which will be achieved as a result of peaceful negotiation must provide preservation of internationally recognized territorial integrity of Azerbaijan.

The Nagorno-Karabakh region is an integral part of Azerbaijan, and this is based on the norms of the international law. The territorial integrity of Azerbaijan is acknowledged by the whole world, and the sooner the government of Armenia recognizes the lack of any prospect for its self-destructive political agenda towards its neighbours, the sooner the people of Armenia will be able to benefit from peace and economic development," Ramiz Hasanov stated.