Call on Armenia by Armenian woman living in Baku - VIDEO 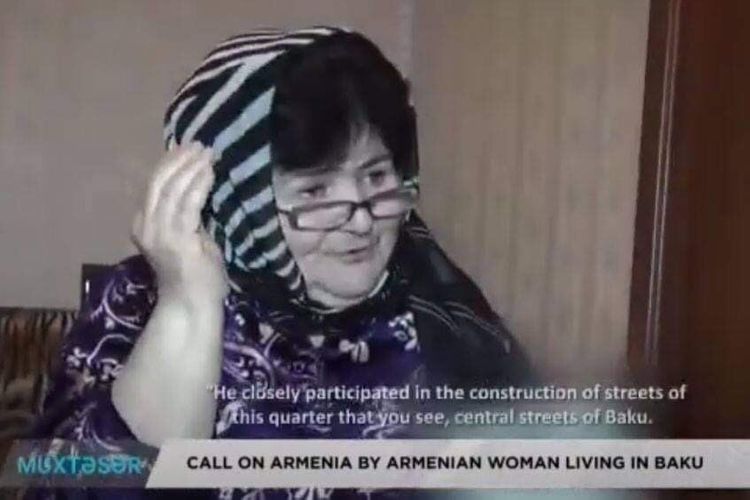 She kisses our flag, drops a tear over Azerbaijanis heroically martyred in battles for Garabagh... She is Armenian by ethnic origin. She was born in Baku, grew up in Baku, married a Bakuvian film cameraman. Rahimova Donara Mikhaylovna aged 75 considers herself a Bakuvian. She didn’t spend even one day of 74 years of her life in separation from Baku. She says she can’t live even one day without Baku and starts a conversation with us.

“Baku is my city, my native streets. Baku is my close relatives, my friends, my lady-friends. I have been sick for a long time, I go out of my apartment in rare cases, I feel bored. I know that Baku becomes more beautiful day by day. Baku changes every day. I think President Ilham Aliyev does his best to beautify Baku and our country so that everything would be beautiful”.

Currently, only one sister of hers is left from her family. Mrs. Donara says after 1990-ies they left Baku. And her two brothers lived in Russia’s Rostov City. Her two brothers died after moving from Baku. She says her sister also misses Baku very much. She works in a factory. She was a worker for many years.

“Azerbaijan has always been an international country”.

She stays with her daughters and grandchildren. She got acquainted with her husband in Baku. Mrs. Donara says they married while loving each other:

“He was a very talented film cameraman. He loved his job very much. They came for filming at my workplace. We got acquainted there, then this acquaintance continued with love and we married. My daughter always asks me, Mom, why my father loved you so much? We lived this way.”

Father-in-law of Donara Rahimova was a renowned road construction specialist:

“He closely participated in the construction of streets of this quarter that you see, central streets of Baku. He made great efforts in laying roads from Shamakhy to Khankendi. They laid new roads in Barda, Kelbejer. There are also writings about him in archives. He was a very merciful, wise man. May Allah bless with his mercy the souls of both of them”.

According to the woman, although everybody in the school where she studied, in the enterprise where she worked, and even her neighbors in the building where she lived knew that she is an Armenian, she has never been treated as an alien.

“I have always been treated well. As early as in 1988, when the Karabakh war started newly, I didn’t go out of my apartment for many days. I felt ashamed, later on, the neighbors saw me in the yard, we greeted each other and talked to each other in a friendly manner. We are also friendly today”.

She talks about the Karabakh war...

“I have always said and am saying now, “let them go away from here!”. They are unscrupulous, dishonest, low! You know, I also tell to the Armenian parents, “take pity on your children, call them back!””

Meanwhile, she answers as follows the question saying “You were in Baku during Khojaly tragedy, what feelings did you experience then?”...

“I still hear the voice of Chingiz Mustafayev saying “Oh Allah, Oh Allah...” and crying bitterly. Please believe my sincerity, I couldn’t get rid of my impressions for a long time. I still think about how Chingiz could withstand this? They also do the same now... My eyes suffer from glaucoma, but I watch it while crying. Now I spend my day in front of the TV set, I wait for twits and speeches of President Ilham Aliyev. Because this is the matter of our pride - do you understand this?”

Yes, we got acquainted with Mrs. Donara who is Armenian by ethnic origin and who lived 75 years of her life in Baku, we listened to her, we caught on video tape what we saw and also presented it to you.