Cause of shame of humankind: 28 years past since Balligaya massacre - VIDEO 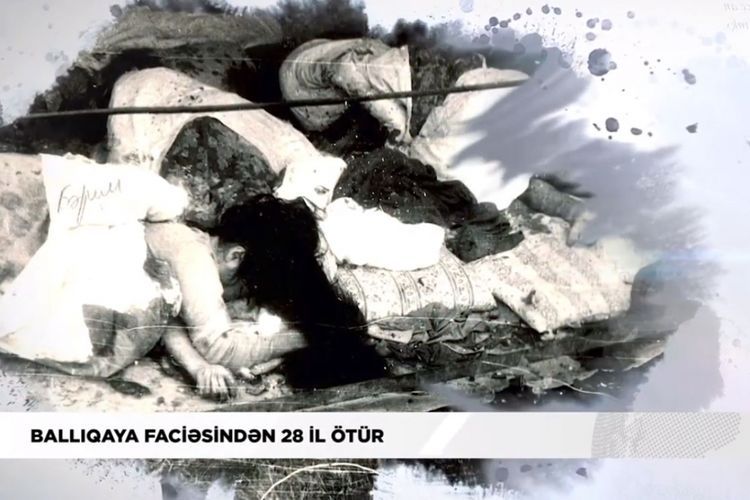 The genocide policy realized by Armenians in the end of the 20th century firstly started with Garadaghly tragedy in Khojavend region. Thereafter, the Kohjaly genocide left mark in human history as the tragedy of the century was committed on February 26, APA TV reports.

The war has its own rules, but this couldn’t be named a war, this was an open cruelty, anger and hatred against humanity. This horror incompatible with humanity was repeated later in Balligaya summer pasture in mountains of Goranboy region. This was the Balligaya tragedy committed against residents of Lachin region on August 28.

Our interviewee, resident of Lachin region Vazir Humbatov currently lives in Poladli village of Terter region. If this can be called a life... In that tragedy, he lost his 6 juvenile children including 1 daughter and his wife Hurzaman aged 33.

Vazir Humbatov said on that day he went to Goygol region in order to choose a dwelling place. Because after leaving Nagdali village of Lachin region he was left without shelter. He was looking for a place to accommodate his juvenile children. And the cold weather conditions were coming up. If he returned to summer pasture by one day earlier, he would bring his children in the intact condition, but he was late: “On that night I wrapped in shroud all members of my family including my wife Humbatova Huruzaman Gara, and my children Elchin Vaziroglu, Bakhtiyar Vaziroglu, Ismayil Vaziroglu, Nabadi Vaziroglu, Gulnar Vazirgizi and Janpolad Vaziroglu. There corpses were not remained behind, they were burnt down and only their bones and ashes were left. We gathered all of them and in one shroud and put them in one grave. That place was also occupied, we can’t go there and visit our graves. May be they have destroyed the graves in such a way that if I go there I will not be able to even find a grave”.

Vazir Humbatov said he suffered psychological shocks for many years and therefore underwent medical treatment. Because he experienced grief over grief. Gulluja village of Agdam region where he buried his wife together with his children in one grave was also occupied. As he couldn’t bear this grief experienced by him he even thought about committing a suicide. But later, at insistence of his relatives, he married for the second time with a woman named Sevda. But what a twist of fate, no child was ever born to the father of 6 children: “I married here, but no child was born to us. Such is life, an hour, a soul given by Allah can’t be taken away by anybody. This is the time given by Allah himself. I wanted to commit suicide. In recent years, my brother has lived in Agjakend village of Goranboy region. He has two sons and he brought one of his sons and gave him to me. That boy has served in and has returned from the army. He brought his son and gave him to me and said: my brother, I have two children, let one of them be yours, and another one – mine. Anyway, this is our fated lot granted by Allah”.

In order to get acquainted with other victims of Balligaya tragedy, we headed to the territory of Barda region called as Virgin Land. We met with Mehidyevs family in the settlement built for internally displaced people. We also didn’t know how and from where to start conversation on this topic. We even hesitated to ask questions. What and whom should we ask!? You see, this family also lost its 4 members on that night.

Our interviewee, a resident of Nagdali village of Lachin region Yunis Mehdiyev said on that night, his mother Gulaya Mehdiyeva aged 67, his brother Rahbar aged 39, his wife Nubar Kalbaliyeva and his sister Sureyya aged 36 together with their close relatives fell victims of the Armenian barbarism.