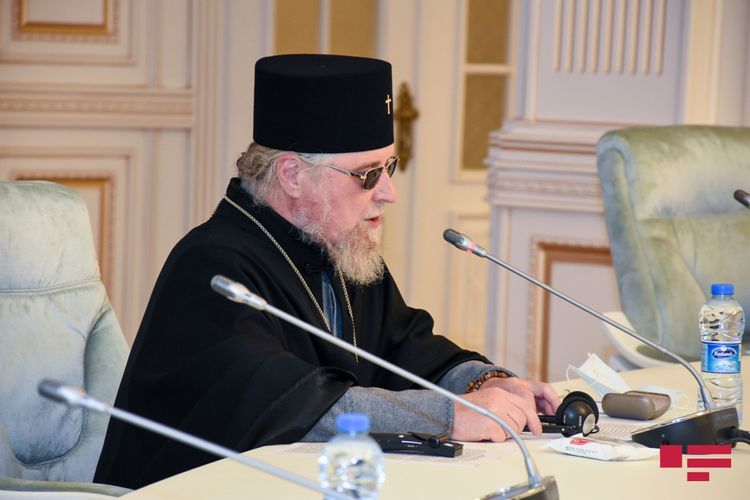 “Sometimes the foreign media writes absurd things not corresponding with reality”, said today archbishop of Baku and Azerbaijan Episcopate of the Russian Orthodox Church Father Alexander at the joint press conference of the Caucasian Muslims’ Office and leaders of religious confessions of Azerbaijan, APA reports.

He noted that it is always interesting to listen to President of Azerbaijan Ilham Aliyev: “Everything that is present should be said. Yesterday, Dmitri Kiselyov conducted a very good interview with President Ilham Aliyev. President Ilham Aliyev disclosed Azerbaijan’s intention. I am very glad that this interview was broadcasted. Though, it may seem ridiculous to some people. Bloggers write things not related to my stance. Our main goal is to deliver position of the Azerbaijani people to the whole world. The Armenian side wants to present this as an inter-religious conflict. Today, the representatives of a number of confessions take part in this event and this shows that this is not about inter-religious conflict. The shrines in Baku are repaired. We also had plans regarding the church in Ganja, but the explosion took place there. What inter-religious conflict we can speak about? The present condition of the Armenian church in Baku is evident. There is an attempt to turn political conflict into an inter-religious conflict and we will do our best in order to prevent the occurrence of this”.