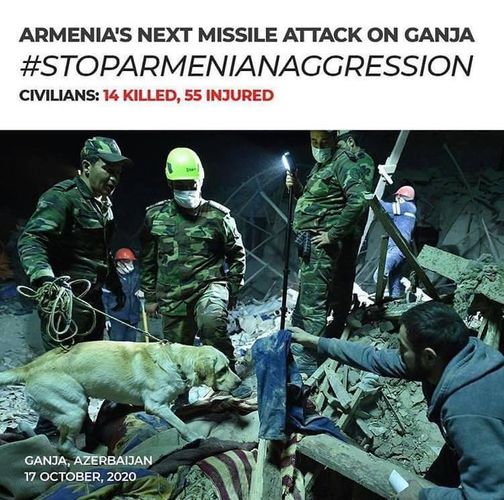 First Vice-President of the Republic of Azerbaijan Mehriban Aliyeva has made a post on her official Facebook page regarding the missile strike on Ganja by Armenia, APA reports.

"How one can be an insane beast to give another order on missile attack of civilian quarters of the sleeping city where there is no any military infrastructure?

Perfidious attack on Ganja done in the night is not only the evidence of fascist nature of the Armenian authorities and their lack of principles, but unveils also the total helplessness of the aggressor in front of the Azerbaijani Army.

Targeted attacks against peaceful citizens are the crime against humanity. And, to remain indifferent means to be the accomplice of this crime!

I express my deep condolences to the families and beloved ones of those killed in the aftermath of this tragedy, and I wish the soonest recovery to all injured ones.

May Allah bless our people, our Motherland and our President! Karabakh is Azerbaijan!"