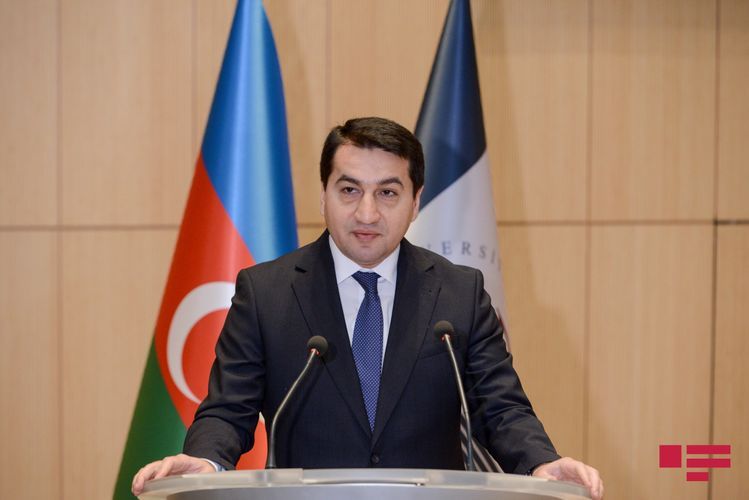 “Armenia's new national security strategy mentions that Armenia is worried about the fact that the region is lagging behind in the sphere of democracy and human rights. It is noted that Azerbaijan and Turkey are lagging behind in the field of democracy and human rights, and this negatively affects the fulfillment of international obligations by these countries,” said Assistant to the President of Azerbaijan, Head of Foreign Policy Affairs Department of the Presidential Administration Hikmat Hajiyev as he commented on Armenia’s new national security strategy, APA reports.

H.Hajiyev noted that this is further evidence of racism and chauvinism: “I believe that Armenia, a country that has occupied the territory of another state and carried out ethnic cleansing, is the very last country that has the right to talk about human rights. Let Armenia, which has shamelessly proclaimed itself a herald of democracy and a champion of human rights, not be worried about us and instead pay attention to the human rights problems that are pervasive in this country.

In general, Armenia’s rant about democracy and human rights is ridiculous in itself. For about 20 years, a military junta was in power in this country, high-ranking government officials were shot in parliament and the current prime minister threatens to “roll up his opponents in asphalt” and he does. Politicians and journalists in Armenia are persecuted for their political beliefs. Journalist Mher Yeghiazaryan died in prison after a hunger strike.

The strategy notes that Azerbaijan and Turkey keep Armenia in an economic blockade and have sidelined it from regional projects. This is a clear lie. The fact that Armenia is making such claims while continuing to occupy the internationally recognized territories of Azerbaijan defies all boundaries.

The document indicates that Armenia's foreign policy views are based on international, interethnic and inter-civilizational dialogue. Armenia’s putting forward such a thesis is ridiculous. It is completely wide of the mark. As noted above, Armenia has carried out ethnic cleansing on its territory and the occupied territories of Azerbaijan, destroyed and appropriated the cultural and historical sites of the Azerbaijani people. The foreign policy of such a state cannot be based on interethnic and inter-civilizational dialogue. In 2016, Armenia was the only country to boycott the Seventh Global Forum of the UN Alliance of Civilizations held in Azerbaijan. This shows once again that the values proclaimed by Armenia and the values of the UN Alliance of Civilizations contradict each other.