Hikmat Hajiyev: “Armenia is not interested in negotiations, tries to reinforce its occupation” 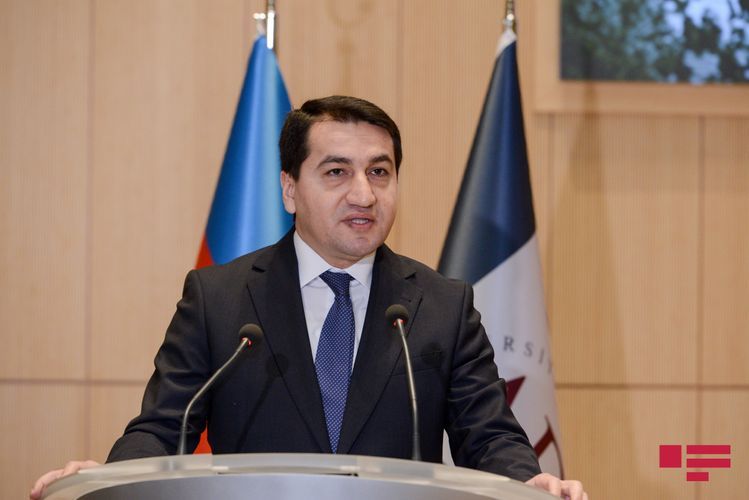 “The document contains numerous references to the Armenia-Azerbaijan conflict. The Azerbaijani side is accused and it is claimed that there is allegedly Armenophobia in Azerbaijan,” said Assistant to the President of Azerbaijan, Head of Foreign Policy Affairs Department of the Presidential Administration Hikmat Hajiyev as he commented on Armenia’s new national security strategy, APA reports.

According to Hikmat Haciyev, in addition, the document contains issues related to the illegal regime Armenia has created in the occupied territories of Azerbaijan.

“I would like to emphasize in this regard that the facts and arguments provided in the strategy in relation to the conflict are also false. Armenia has occupied Nagorno-Karabakh of Azerbaijan and seven adjacent districts. Armenia has committed genocide against the Azerbaijanis, carried out ethnic cleansing and perpetrated war crimes. Despite the demands of four UN Security Council resolutions, Armenia has not yet withdrawn its army from the occupied territories. Armenia is pursuing a policy of illegal activities in the occupied territories, including illegal settlement. Armenia is trying to destroy the traces of Azerbaijan in the occupied territories. By grossly violating the ceasefire on the line of contact and at the state border, Armenia commits provocations, deliberately shells Azerbaijan’s civilian population and facilities. Armenia is not interested in negotiations, is trying to artificially delay the status quo and reinforce its occupation.

As for the far-fetched opinions about the April 2016 battles, I would like to note that Armenian armed forces resorted to yet another provocation against Azerbaijan then. Azerbaijan had to take retaliatory measures to protect its population. During the recent provocation Armenia committed in the direction of Tovuz district of the state border of Azerbaijan, civilian population and facilities were once again deliberately fired upon,” Hikmat Hajiyev said.