Hikmet Hajiyev: "Lies spread by Armenia about Mayis Barkhudarov aims to reduce anxiety in their societies" 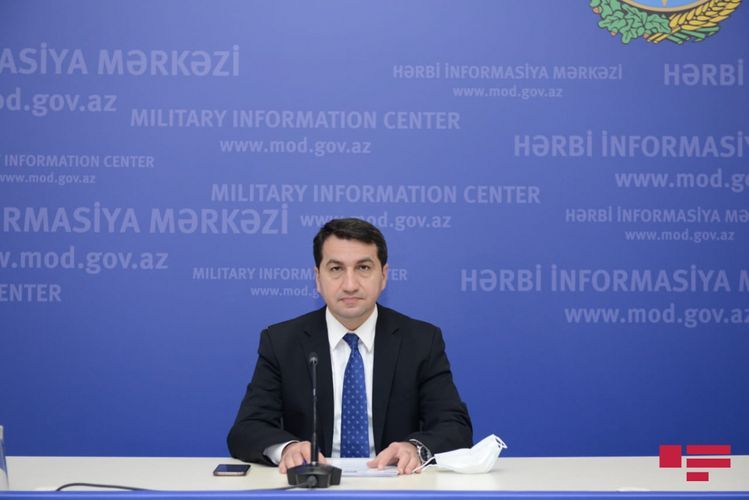 "The lies spread by Armenia about Major-General Mayis Barkhudarov are aimed at reducing anxiety in their societies," said Hikmet Hajiyev, Assistant to the President of the Republic of Azerbaijan - Head of the Foreign Policy Department of the Presidential Administration of the Republic of Azerbaijan at a briefing by the Defense Ministry, APA reports.

He noted that within the framework of military gathering measures carried out so far, the process of involving reservists in exercises was carried out: “Yesterday, as a result of Armenian Armed Force’s attack, 5 members of one family in Naftalan region were killed. We express condolences to the relatives of that family. This shows the fight trait of Armenians. They target civilians cowardly and helplessly. Azerbaijani Armed Forces give them the necessary rebuff and the enemy is suppressed. Brave battle operations are continued by our Armed Forces.”
He noted that Azerbaijani generals continue their combat operations in the leadership of our army: “Armenia’s false information is being exposed. At the same time, the visit of foreign media representatives to Azerbaijan is organized. There are the media representatives of Russia, Turkey, and other media representatives. Representatives of Al Jazeera TV are also on a visit to our country. They will be informed about the provocations of Armenia in order to provide full information to the international community.”