Ilham Aliyev: President of France made a statement and I said it is wrong, it is false 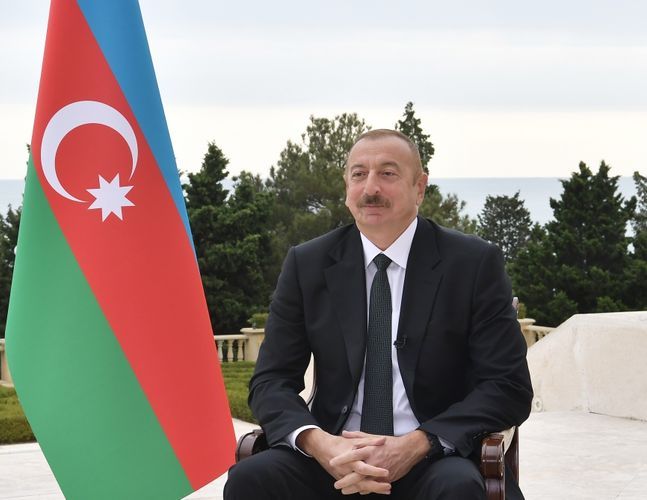 "I already made statements about that. Turkey is our brotherly country from the very first day of Armenian attack, from the very 1st hour, Turkey expressed its full support to Azerbaijan," President of the Republic of Azerbaijan Ilham Aliyev said in an interview to Al Jazeera TV channel, APA reports.

"My brother, president Erdogan many times made very important statements. And yesterday speaking at the opening session of the parliament he made another very important statements that Turkey is next to Azerbaijan, and Azerbaijan is not alone. We feel the support we are very grateful to our Turkish brothers and president, and other officials. But Turkey in no other way is involved in the conflict. One of the Armenian fake news which now is not any longer in the media, was that Turkish F-16 shot down Armenia’s SU-25. This is fake news. Where are the proofs? No proofs. Every plane, which lands and takes off is in the computer. Everybody can see what is happening. And I wonder why? Minsk Group co-chair countries France, United States, Russia they do not comment on that. They do not comment on this fake news, some of them comment on other fake news that Azerbaijan with Turkey invited terrorists here," said Azerbaijani President.

"Let them show it. Where is evidence? Not only Armenia, unfortunately President of France I heard yesterday made a statement about that and he called me on the 27th in the evening and I said it is wrong, it is false. And he made the statements without any evidence. Let him give us evidence. Let him give us proofs. Only words? We can also say many words. But we don’t. We behave in a responsible way. There is not a single evidence of any foreign presence in Azerbaijan. What we do, we do ourselves. We have capable army. We have enough people in our army, we have enough people in our reserves. I announced a partial mobilization, which will allow us to involve tens of thousands of reservists. If necessary, so we don’t need it. Armenia needs it, because Armenian population is declining. And it is only two million people. Therefore, they themselves now recruit people from Middle East and we have evidences and not only of Armenian origin. And by the way, it doesn’t make any difference whether it is of Armenian origin coming from Middle East or non-Armenian origin. If anybody comes from outside to fight as a mercenary that should be internationally addressed. So, it is this accusations that absolutely groundless, and we reject them, and we demand the evidences to be put on the table," said Ilham Aliyev.