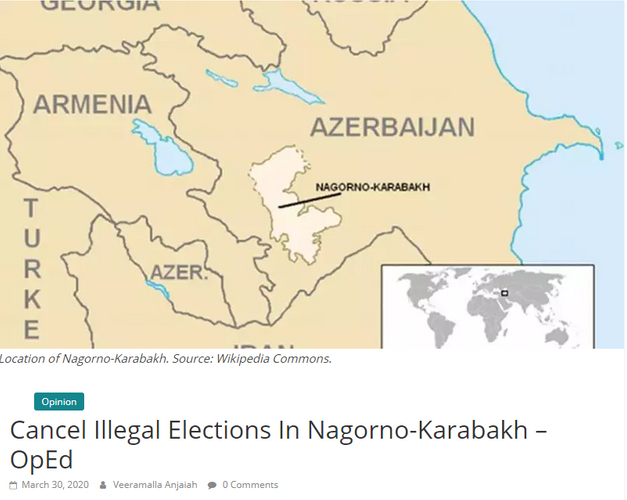 The correspondent of The Jakarta Post  newspaper of Indoenesia Veeramalla Anjaiah wrote  an article calling for the cancellation of the "presidential" and "parliamentary" elections scheduled for March 31, 2020 in the so-called "Nagorno-Karabakh Republic", Indonesia’s Embassy to Azerbaijan told APA.
The article reads:
“Have you ever heard of a self-proclaimed so-called country Republic of Artsakh?
This unknown or little-known regime, strangely, will be hosting its presidential and parliamentary elections on March 31 in the middle of the coronavirus pandemic.
Only Armenians know about this country. Even its name had only come into existence in 2017. Its previous name was Nagorno-Karabakh Republic, which was declared as a separate country in 1991. Until this day, no country, including its main patron Armenia, has recognized this republic.
With a total land area of 11,433 square kilometres and a population of about 140,000 people, Nagorno-Karabakh is a landlocked region in South Caucasus.
In fact, the Nagorno-Karabakh region is an integral part of Azerbaijan. This was recognized by the whole world.
Armenian troops seized Azerbaijan’s  Nagorno-Karabakh region and seven adjacent districts during the 1991-1994 war which killed some 30,000 people and turned one million Azerbaijanis into refugees and internally displaced persons.
The Armenian troops told the local militia to declare themselves as an independent country called Nagorno-Karabakh Republic.
During the war in 1992, Armenians committed many atrocities in a town called Khojaly, including genocide and ethnic cleansing against ethnic Azerbaijanis, and evicted around 40,000 Azerbaijanis from Nagorno-Karabakh. There was a cease-fire in 1994, mediated by Russia, and peace negotiations have been going on between Armenia and Azerbaijan to this day.

The majority of people living in Nagorno-Karabakh are Armenian Christians, but the area legally belongs to Muslim-majority Azerbaijan.
Holding elections in an occupied territory is not only illegal but also threatens the peace efforts of the Organization for Security and Cooperation in Europe (OSCE) Minsk Group.
It seems Armenia is desperate to legitimize its presence in the occupied territories of Azerbaijan and make its occupation permanent y holding elections. Azerbaijan described the March 31 elections as a big “political drama” orchestrated by Armenia.

“No doubt, it is a big political drama created by Armenia. Nagorno-Karabakh is our land. Holding elections on March 31 in our land by Armenia is illegal and is not acceptable to us. We ask the international community to condemn Armenia’s actions that threaten peace,” Azerbaijan Ambassador to Indonesia Jalal Mirzayev told this author on Friday in a telephone conversation in Jakarta. “The illegal occupation and the upcoming illicit elections are blunt violations of international laws.”
Armenia, which has its troops in Nagorno-Karabakh, will be sending 300 election observers to Karabakh despite the threat from the COVID-19 pandemic. Some of these observers may spread the coronavirus.
According to the worldometers website, as of March 29, there are 424 infections in Armenia. So far, three people have died from COVID-19. The virus is spreading rapidly to many towns and cities. Officially, there are no COVID-19 cases in Nagorno-Karabakh, but many people suspect the virus is already there and spreading rapidly.
Both Armenia and Nagorno-Karabakh spend more borrowed money on troops and weapons rather than on healthcare. Hence, the health system is in poor condition and is unable to cope with the COVID-19 pandemic.
Many Armenians living in Nagorno-Karabakh secretly made an appeal to Azerbaijan to save them from the COVID-19 crisis.

The election authorities are insisting that elections will go ahead on March 31.
Several opposition members, including presidential candidates Hayk Khanumyan and Krisyine Balayan, demanded the government to cancel the elections on March 31 and impose an emergency to stop the spread of COVID-19 in Nagorno-Karabakh.
From the health point of view, Armenia should cancel these illegal elections. It will be a life-threatening act if Armenia goes ahead with the March 31 elections, given the threat of  COVID-19.
According to Armenian media sources, there are 14 candidates competing for the presidential post while a record 27 political parties are competing for 33 parliamentary seats.
Nagorno-Karabakh’s so-called Foreign Minister Masis Mayilian, parliament speaker Ashot Ghulian, former prime minister Arayik Harutiunian, a retired army general Vitaly Balasanian and notorious Nagorno-Karabakh war leader Samvel Babayan are some of the leading presidential candidates. But the key will be in the hands of Yeravan, whoever wins the election.
Armenia has been undergoing sweeping changes in recent years. Radicals, militants and Nagorno-Karabakh war veterans dominated Armenian politics and robbed the country for many years. The unemployed youths revolted against the old leaders in the 2018 Velvet Revolution.
The killers of thousands of innocent and unarmed Azerbaijani people during the Nagorno-Karabakh war, like Serzh Sargsyan and Robert Kocharyan, were made zeroes from heroes by the Velvet Revolution. A new generation of leaders like Prime Minister Pashinyan came to power.
But the Velvet Revolution has not yet reached Nagorno-Karabakh. The war and militia leaders still dominate Nagorno-Karabakh politics. It is time for change.

Armenians in both Armenia and Nagorno-Karabakh must realize that the occupation of Azerbaijan’s land, including Nagorno-Karabakh, did not bring any major benefits. It brought only economic hardships and made their country heavily debt ridden. Hundreds of thousands of talented and skilled workers are leaving the country every year. Armenia is now one of the most militarized countries in the world.
The United Nations Security Council has already asked Armenia to withdraw its troops from Azerbaijani territories through its four 1993 resolutions. Withdrawal of troops from the occupied territories of Azerbaijan is a precondition for peace. Azerbaijan has already offered the highest level of autonomy to Nagorno-Karabakh.
For many centuries, Azerbaijanis and Armenians lived in peace and harmony. If Armenia makes peace with Azerbaijan, it will benefit a lot in many ways. It can allocate the money that it is using now on weapons for economic development and prosperity. The occupation has proved that it is not beneficial for Armenia anymore.
Canceling the elections in Nagorno-Karabakh, for peace and everybody’s health, will be the first step in that direction.”