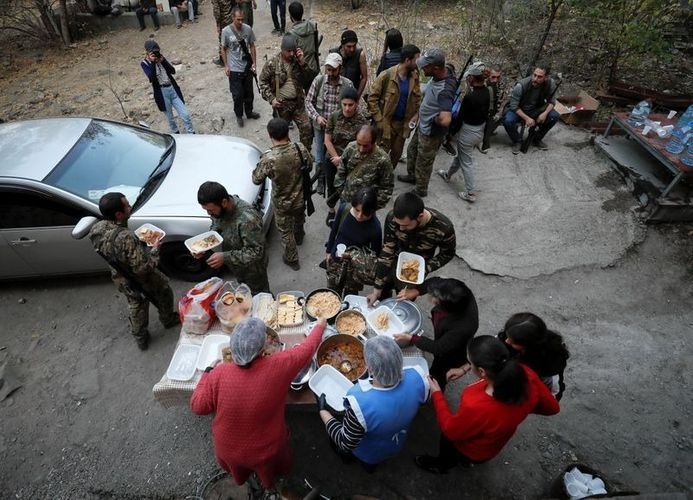 A report released by Reuters once again confirmed that foreign citizens were fighting on the Armenian side.

"When Lebanon’s financial crisis pushed Vartkes to leave for Armenia this summer, he never imagined he would volunteer to fight in Nagorno-Karabakh. The young Lebanese-Armenian didn’t think twice," says the article.

An Armenian Defense Ministry official told Reuters that the foreigners were "many from the diaspora" without specifying the exact number, and that they had applied to volunteer: "A local instructor says hundreds of people from as far away as Argentina and the United States have come to Armenia for combat training," the article reads.

Karapet Aghajanyan, the combat instructor in Yerevan, who trains local and foreign volunteers, told Reuters around 10 Lebanese-Armenians have received training in his camp.

He said they arrived from Beirut after the fighting broke out in late September to go to the frontline.

Scores of Lebanese of Armenian descent were already leaving Beirut for Yerevan months before the fighting, members of the community say. Lebanon’s economic collapse, and then the huge Beirut port explosion that killed nearly 200 people in August, have fuelled migration.

Lebanese MP Hagop Pakradounian, who heads the Armenian Revolutionary Federation party, said there was no organisation registering or sending any volunteers from Lebanon.

According to the agency, the Armenians also tried to involve Lebanon in the process.

Commemorated one of their own who was killed in battle, Kevork Hadjian: "He was an opera singer born in the Lebanese town who lived in Armenia."

Many residents saw him as a hero.

The singer’s 74-year-old mother, Sosse Hadjian, said she had spent days watching TV, weeping over slain fighters. But she didn’t know her son was at the front until her brother delivered the news of his death.