Kamaladdin Heydarov: “All houses which destroyed as a result of Armenia’s bombing of Ganja will be rebuilt” - UPDATED 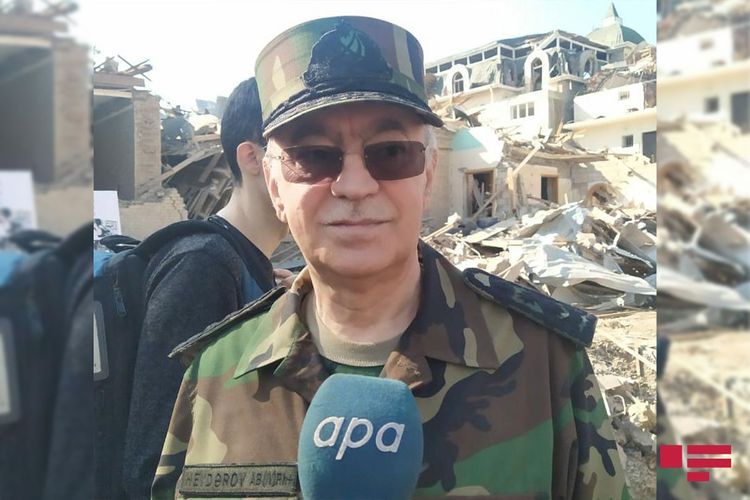 “We saw immediately from observation camera the rocket fired by Armenia to Ganja city. Employees, rescuers, employees of special risk groups were immediately involved in the scene, they started rescue and search works. As we know, 9 bodies were removed from the rubble during the event, 35 people injured. Unfortunately, there are children among injured too,”  said the Minister of Emergency Situations Kamaladdin Heydarov who is in the visit in ganja, APA’s local bureau reports.

Minister said that the enemy’s bombing Ganja is one of the results of Armenian fascism, ugly politics conducted by military-political leadership of Armenia against Azerbaijan for years: “They do not commit it alone, the ugly politics started by them since 1988, has been continued for more than 30 years. The most tragic of them is the Khojaly genocide in 1992, none of the people killed there were militants. They commit the brutality, genocide against Azerbaijanis, their commitment to Ganja is a continuation of the same barbarism.”

K. Heydarov noted that the Armenian army and military-political authority have been responded: “We witnessed amazing unity of state and nation from September 27. Such a union between authority and population has never been in Armenia and will not be. Because all our population, soldiers by the leadership of our Supreme Commander-in-Chief, work and fight as armed soldiers. There has never been such high spirituality in our citizens so far. Mr. President also noted the last day that today’s victory, triumph have not been in the Azerbaijani history. Azerbaijan has had economic, political, diplomatic victories in many fields, but it is a historical victory. All of us, including Supreme Commander-in-Chief, Mrs. Mehriban Aliyeva, those 5-6-year-old children, who made a soldier salute to us when we came before, are experiencing the history. Our nations, Army, Leader, children, families are experiencing the victory. Happiness, the historical result of the victory will be very good for Azerbaijan.”

K. Heydarov said that Armenians shell civilians using large-caliber weapons, strike rockets to residential settlements: “We are delivering these to the world. The world already sees these. Excepting 1-2 pro-Armenians, all acknowledge Azerbaijan’s rightful work. All know that we are on the path of right. Our territories have been liberated from occupation, we are waging war in our lands. We will liberate all of our occupied territories. I pray to God for mercy for the victims of the path. May all martyrs, all our people, sacrificed their lives on the path, rest in peace. We are strong, we will win as a whole nation with our Supreme Commander-in-Chief. You remember our previous motto – “We are strong together”. Our new motto is “Garabagh is Azerbaijan!” now. We should go ahead with it. High spirituality should be maintained in all, as we have many works ahead.”

The minister noted that all destroyed houses will be rebuilt: “From the day when the event occurred, in the morning of that night our all bodies, as well as Construction Control Department are carrying out investigations at the scene. They are calculating how many houses damaged in the event. It is the instruction of Mr. President that no one is in need of from their house or another thing which they lost. All of them will be demolished and rebuilt. Some people will be provided with houses. All the losses suffered by our citizens will be restored by us. Let the people of Ganja should not have any worries about this.”