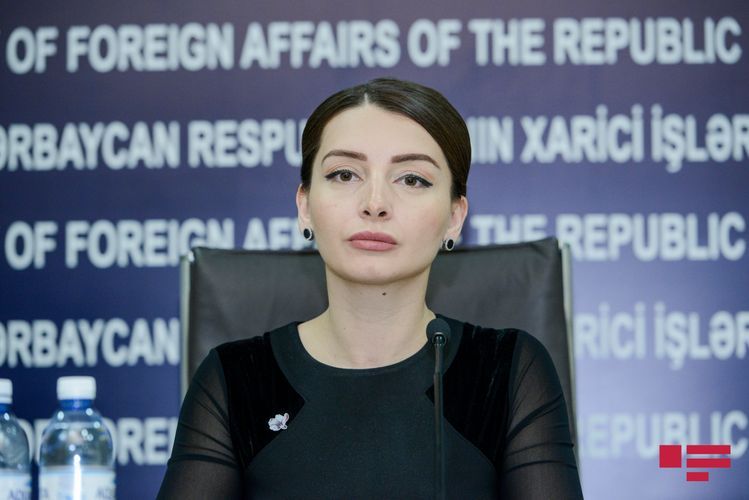 Head of the Press Sevice Department of the MFA of the Republic of Azerbaijan, Leyla Abdullayeva has commented on the joint statement by the members of the European Parliament with regard to the construction by Armenia of the third highway connecting the Nagorno-Karabakh region of Azerbaijan with Armenia, the MFA told APA.

L. Abdullayeva noted the joint statement by the members of the European Parliament (EP), the chair of the Delegation to the Parliamentary Partnership Committees of the EU and the countries of the South Caucasus, MEP Marina Kaljurand, EP’s standing rapporteur on Armenia, MEP Traian Basescu and EP’s standing rapporteur on Azerbaijan, MEP Željana Zovko, in fact, reiterated the well-known position of the international community on the Armenia-Azerbaijan Nagorno-Karabakh conflict:  "All the members of the international community, except the aggressor state Armenia, unequivocally support the sovereignty and territorial integrity of Azerbaijan within its internationally recognized borders and numerous decisions and documents adopted by the international organizations with the related UNSC resolutions on top, demand the complete and unconditional withdrawal of the occupying Armenian forces from all the occupied territories of Azerbaijan.

We appreciate the position of the MEPs, which is based on international law, as well as the EU Council Conclusions of 11 May 2020 on EaP Policy beyond 2020. As the document states respect to international law, including territorial integrity, independence and sovereignty is our shared commitment to building a common area of shared democracy, prosperity and stability. This position was also stated clearly in accordance of the basic and institutional legal norms, values and principles of EU itself.

When it comes to hysteria in Armenia on this regard, let me remind that the joint statement of the members of the EP is just expressing the hard facts, nothing more. We recall on the authorities of Armenia to prepare their population to peace, rather wasting their time on questioning the firm position of the international community. Durable peace, security, stability and prosperity in the region are achievable, only after the consequences of Armenia’s aggression are removed, thus ensuring that its armed forces are withdrawn from the territories of Azerbaijan, the territorial integrity of Azerbaijan is restored within its internationally recognized borders and the human rights and fundamental freedoms of hundreds of thousands of Azerbaijani internally displaced persons are guaranteed."