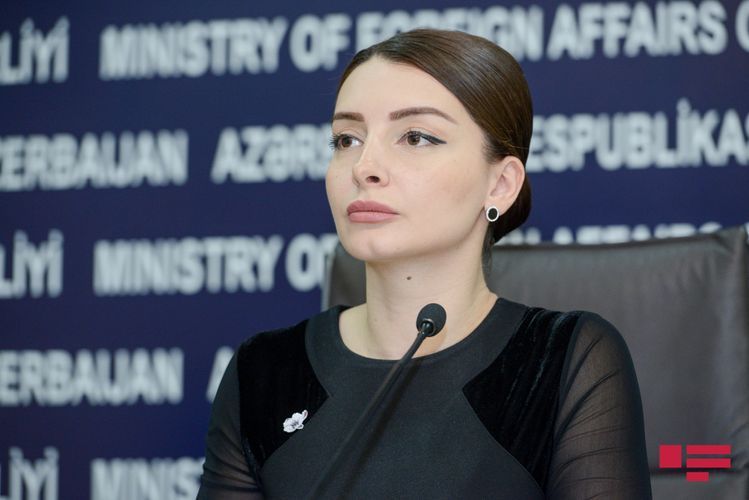 Leyla Abdullayeva, head of the press service of the Azerbaijani Foreign Ministry, commented on the statement of the Armenian Foreign Ministry regarding the interview of the President of the Republic of Azerbaijan to the local media at the groundbreaking ceremony of the Absheron field offshore operations, APA reports.

L. Abdullayeva said that the President of the Republic of Azerbaijan Ilham Aliyev during his participation in the groundbreaking ceremony of the "Absheron" field naval operations on September 19 this year in his interview with local media, as usual, reflected the historical realities and based on real facts. exposed the true face of the country's leadership: "The traditional false and hypocritical statement issued by the Armenian Foreign Ministry on this issue shows that the country is still unable to accept the bitter truth.

Armenia has been pursuing an aggressive policy in defiance of the norms and principles of international law, occupying Azerbaijan's internationally recognized territories and carrying out ethnic cleansing in the occupied territories, creating a hotbed of conflict in the region and threatening lasting peace and security for many years.

Provocative leadership of this country is far away from a proper assessment of the situation in the region and ongoing processes around, and provision interests of its nation, like its previous criminal junta regime. Unfortunately, pursuing an independent policy on the basis of national interests and perceive the benefit of peace, security, and welfare in the region have not been granted to Armenia yet.

Irresponsible and provocative behavior of Armenian leadership aggravates tension in the region and thus, destroys the opportunity of resolution of the conflict, caused by Armenia itself, by negotiations.

Attempts by the Armenian Prime Minister to change the format of the negotiation process, making unfounded remarks about the talks, nonsensical statements made in August 2019, the attack of the Armenian armed forces on the Azerbaijani-Armenian border on July 12-16, 2020, on August 23. The sabotage attempt of the Armenian sabotage-intelligence group, the demonstrative implementation of the policy of illegal settlement in the occupied territories of Azerbaijan, and other such provocations are a direct blow to the political settlement of the conflict and the responsibility lies with the Armenian leadership," said L. Abdullayeva.