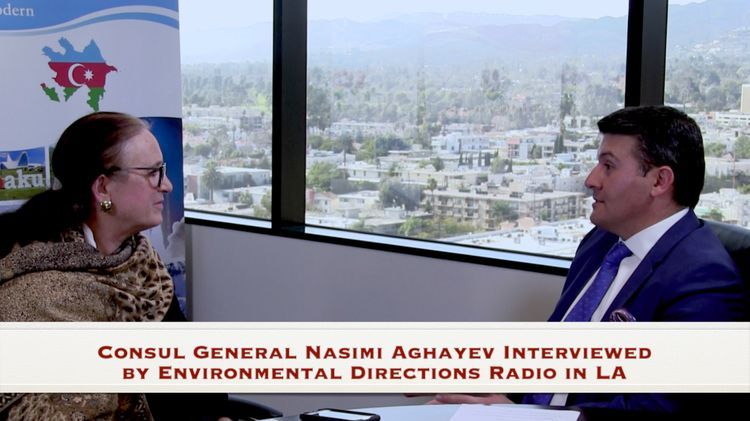 During the interview, Consul General Aghayev informed the listeners about Armenia’s aggression and ethnic cleansing policy against Azerbaijan and mentioned that the Karabakh region has always belonged to Azerbaijan. He also noted that despite the four resolutions adopted by the UN Security Council and condemn Armenian aggression, Armenia still refuses to fulfil them.

Informing about the Khojaly Genocide, the Consul General stated that perpetrators of this genocide are still at large and have not been brought to justice yet. He said that as much as Armenia tries to deny the responsibility for this massacre, the facts speak for themselves and cannot be changed. In this regard, the Consul General mentioned the admission of culpability for this mass killing expressed by Armenia’s former president Serj Sargsyan.

Consul General Aghayev underlined that an effective international campaign “Justice for Khojaly” launched in 2008 and led by Ms. Leyla Aliyeva, Vice President of the Heydar Aliyev Foundation, has been instrumental in mobilizing efforts aimed at raising international awareness about Khojaly. In this regard, he mentioned that more than 10 countries and 23 U.S. States have recognized and officially condemned the Khojaly massacre. Furthermore, Consul General Aghayev stressed that two books were published, many articles were written on Khojaly by American authors, as well as a documentary film “Running from Darkness” was produced by American filmmakers in Los Angeles in 2017.

The Consul General noted that unlike Azerbaijan, where people of different religious backgrounds live in peace and harmony, Armenia today has become a monoethnic and mono-religious country, where various forms of ethnic and religious hatred such as Azerbaijanophobia and antisemitism have been increased. He mentioned that according to Anti-Defamation League's survey, Armenia stands second in Europe and third in the world, excluding Middle East and Northern African countries, for the level of anti-semitism. Consul General Aghayev also highlighted that Garegin Nzdeh who was the Nazi collaborator, is the national hero of Armenia, and there is a statue of him unveiled in a central square of Yerevan.

In the end, the Consul General stated that today Azerbaijan under the leadership of the President İlham Aliyev, has become an island of stability and prosperity in the challenging region, and that Azerbaijan continues its efforts for the peaceful settlement of the conflict within the territorial integrity of Azerbaijan.

It should be noted that the host of this weekly international radio program, which was established in 1977, is the three times Emmy nominee, journalist Nancy Pearlman. The program is being broadcasted via different radio stations in California and other Western U.S. States.