MFA: We firmly reject the statements of the Armenian side against Azerbaijan, containing baseless accusations of violation of international humanitarian law and "Armenophobia" 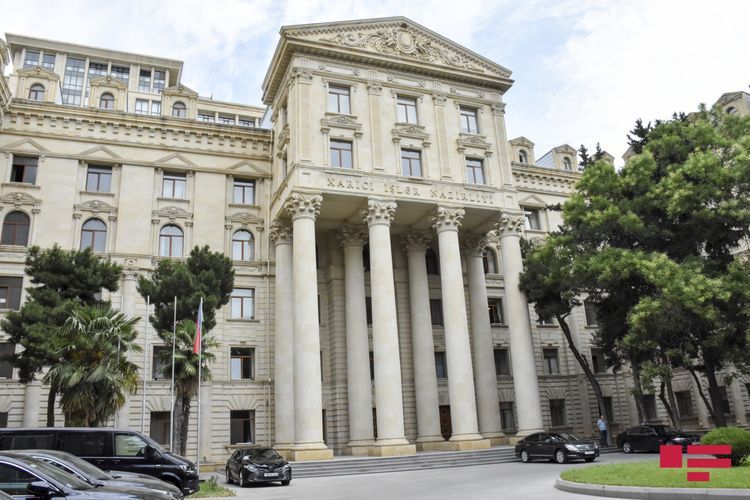 At a time when the Armenian armed forces are intensifying reconnaissance operations in various parts of the frontline, including the use of unmanned aerial vehicles, the reconnaissance and sabotage activities carried out under the leadership of Gurgen Alaverdiyan, show that the Armenian military-political leadership is pursuing another military venture on the frontline and it should be accepted as a sign of intention to aggravate the military situation.

Armenia's baseless and ridiculous accusations against Azerbaijan in a state of hysteria and panic after the revelation of its nefarious intention is an attempt to divert the attention of the international community, as well as Armenian society from the failures of its military venture policy.

We firmly reject the statements of the Armenian side against Azerbaijan, containing baseless accusations of violation of international humanitarian law and "Armenophobia". The Azerbaijani side treated the captured Gurgen Alaverdiyan in accordance with the requirements of humanitarian law.

In this regard, it should be recalled that the country that has made allegations that Azerbaijan violated international humanitarian law, is Armenia which has committed war crimes and crimes against humanity, as well as military aggression accompanied by genocide and ethnic cleansing against the Republic of Azerbaijan for almost 30 years. As a result of the Armenian aggression against the Republic of Azerbaijan, 20,000 Azerbaijanis were killed, 50,000 people were disabled, about one million civilians were forcibly expelled from their homes, 5,364 went missing, taken captured and taken hostage and subjected to severe torture and humiliation. The fate of about 4,000 of these people is still unknown.

Armenia is currently holding civilians Dilgam Asgarov and Shahbaz Guliyev hostage, torturing them and illegally depriving them of their liberty.

Armenia which recalls humanitarian law, including the Geneva Conventions in the context of the capture of an officer of the Armenian armed forces, must not forget that previous and current government of Armenia stubbornly objects Azerbaijan's proposal supported by the international community, as well as the co-chairs of the OSCE Minsk Group to exchange the prisoners of war and hostages on both sides based on "all for all" principle.

Making absurd allegations against Azerbaijan, by ignoring the most ordinary values of humanity and the most important principles of international humanitarian law, Armenia did not even hesitate to make the corpses of those killed in the conflict the object of political and financial benefits, and as a state that applied a "price list" to corpses in accordance with their profession or military ranks, has long lost its moral right to speak of humanism, tolerance and similar ideas.

It is the ultimate hypocrisy for the current Armenian leadership, which openly refuses to apologize for the grave war crimes and crimes against humanity committed by the former Armenian military-political leadership against Azerbaijan and its civilians, to accuse Azerbaijan in respect of humanism and humanitarian law.

Accusing Azerbaijan of undermining the establishment of an environment conducive to peace, Armenia makes a failed attempt to absolve itself of responsibility for the situation with its attempted attack on the state border in the direction of Tovuz on July 12-16 followed by provocative statements and actions that aggravated the situation on the frontline and undermined efforts to resolve the conflict.

The world community understands that the military-political leadership of Armenia bears responsibility for the deliberate escalation of the situation in the direction of Tovuz, and the attempt of this country to use the situation around the prisoner of war Gurgen Aleverdiyan to divert the attention is doomed to failure.

The Azerbaijani side once again categorically rejects the unfounded accusations of Armenia against our country for violation of humanitarian law and Armenophobia and calls on the international community to take proactive steps to deter the country from its attempts to aggravate the already sensitive situation in the region," the commentary reads.