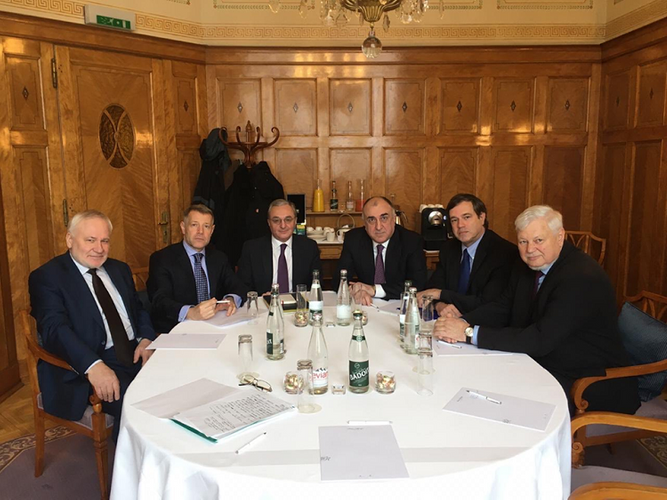 The online meeting of the Foreign Ministers of Azerbaijan and Armenia with mediation and participation of the OSCE Minsk Group Co-chairs and the Personal Representative of the Chairperson-in-office took place on June 30, 2020, the MFA told APA.

During the online meeting lasting for one hour, the sides discussed the current situation of the settlement of the Armenia-Azerbaijan Nagorno-Karabakh conflict.

Minister Elmar Mammadyarov raised the issue of the illegal activities by Armenia, including the infrastructural changes in the occupied territories of Azerbaijan.

The Co-chairs noted the increase of aggressive rhetoric. Minister Elmar Mammadyarov highlighted that the provocative actions by Armenia bring to the escalation of rhetoric.

The sides agreed to arrange the following online meeting of the Foreign Ministers of Azerbaijan and Armenia with mediation and participation of the Co-chairs of the OSCE Minsk Group during the upcoming month. Also, the Co-chairs noted that they would consider the opportunities of organizing the meeting in person between the Ministers as soon as it is possible.

The meeting in a videoconference format between Azerbaijani Foreign Minister Elmar Mammadyarov and his Armenian counterpart Zohrab Mnatsakanyan has started, the head of press service of the Ministry of Foreign Affairs of the Republic of Azerbaijan Leyla Abdullayeva wrote on Twitter, APA reports.

The meeting is being held with mediation and participation of the OSCE Minsk Group co-chairs and personal representative of the OSCE Chairman-in-Office.

Note that the meeting in videoconference format was held between the minister of Foreign Affairs of the Azerbaijan Republic Elmar Mammadyarov and the OSCE Minsk Group co-chairs Igor Popov (Russia), Stéphane Visconti (France) and Andrew Schofer (USA) and the Personal Representative of the OSCE Chair-in-Office Andrzej Kasprzyk yesterday.