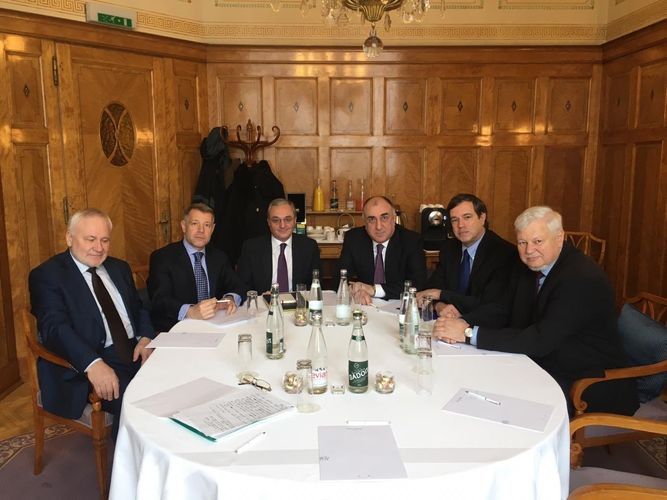 The meeting of Foreign Ministers of Azerbaijan and Armenia in Geneva with mediation of the OSCE Minsk Group co-chairs and Personal Representative of the OSCE Chairperson-in-Office lasted for 7 hours, Spokesperson of the Ministry of Foreign Affairs (MFA) of the Republic of Azerbaijan wrote on Twitter, APA reports.

"The parties and co-chairs advocate for intensifying negotiations and achieving tangible results on all issues of negotiation agenda. " L. Abdullayeva wrote.

The meeting will continue tomorrow,

Meeting between Azerbaijani Foreign Minister Elmar Mammadyarov and Armenian Foreign Minister Zohrab Mnatsakanyan have started in Geneva, Spokesperson of the Ministry of Foreign Affairs (MFA) of the Republic of Azerbaijan wrote on Twitter, APA reports.

Note that the Nagorno Garabakh conflict entered its modern phase when the Armenian SRR made territorial claims against the Azerbaijani SSR in 1988.

A fierce war broke out between Azerbaijan and Armenia over the Nagorno Garabagh region of Azerbaijan. As a result of the war, Armenian armed forces occupied some 20 percent of Azerbaijani territory which includes Nagorno Garabagh and seven adjacent districts (Lachin, Kalbajar, Aghdam, Fuzuli, Jabrayil, Gubadli and Zangilan), and over a million Azerbaijanis became refugees and internally displaced people.

Dealing with the settlement of the Nagorno Garabagh conflict is the OSCE Minsk Group, which was created after the meeting of the CSCE (OSCE after the Budapest summit held in December 1994) Ministerial Council in Helsinki on 24 March 1992. The Group’s members include Azerbaijan, Armenia, Russia, the United States, France, Italy, Germany, Turkey, Belarus, Finland and Sweden.

Resolutions 822, 853, 874 and 884 of the UN Security Council, which were passed in short intervals in 1993, and other resolutions adopted by the UN General Assembly, PACE, OSCE, OIC, and other organizations require Armenia to unconditionally withdraw its troops from Nagorno Garabagh.