Minister: "Armenia made many appeals for ceasefire itself, but grossly violates the ceasefire, when it comes into force" 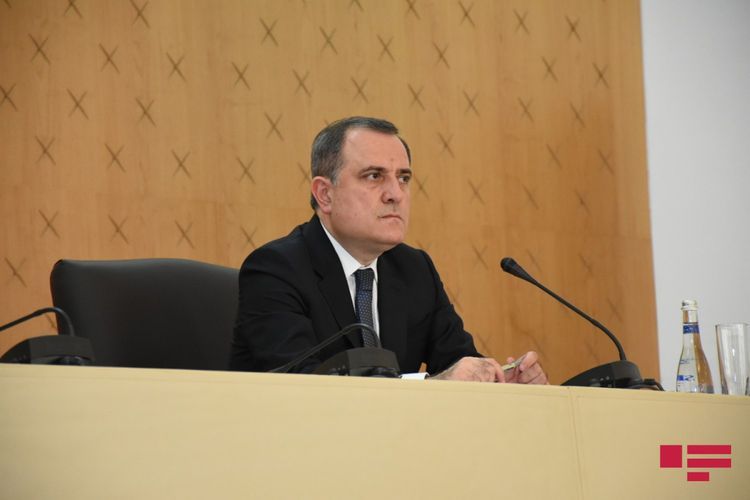 "Assessment of yesterday's negotiations and the adopted statement is that there were many appeals for declaration of a ceasefire on the humanitarian bases. A few days ago Russian President Vladimir Putin also spoke with the initiative. We highly appreciate the initiative. You know that such a meeting was held after Russian President's negotiating with the Azerbaijani President and Armenian Prime Minister. A Statement was adopted after long discussions", said Minister of Foreign Affairs Jeyhun Bayramov at the press conference held today, APA reports.

According to the Minister, purpose is realization of exchange of bodies of the dead, captured, and detained persons with involvement of the International Committee of Red Cross: "There are additional articles in the document too. According to these articles, Armenia takes responsibility of return of negotiations to the basic principles, immediate start of substantive negotiations after ceasing fire. There is an article on the impossibility of changing format of negotiations in the statement, as Armenia has made it suspicious in recent times. When we say the format of negotiations, we mean conduction of negotiations between Azerbaijan and Armenia. Involvement attempt of any third party to the negotiations by Armenia is rejected by Azerbaijan. We put this issue an end for the next time in the document."

J, Bayramov said that although a few hours have passed since the declaration of ceasefire, Armenia does not follow it, attempted for a counter-attack in several directions, and repulsed by the Azerbaijani Army: "It causes regret, as Armenian state demonstrated hypocrisy for the next time. Many appeals were made by the Armenian side for the ceasefire, at the same time many international organizations called for it. However, when the ceasefire came into force, it is grossly violated by Armenia. A few hours have passed from the ceasefire yet. Probably it will be possible to assess the situation more exactly after a while."