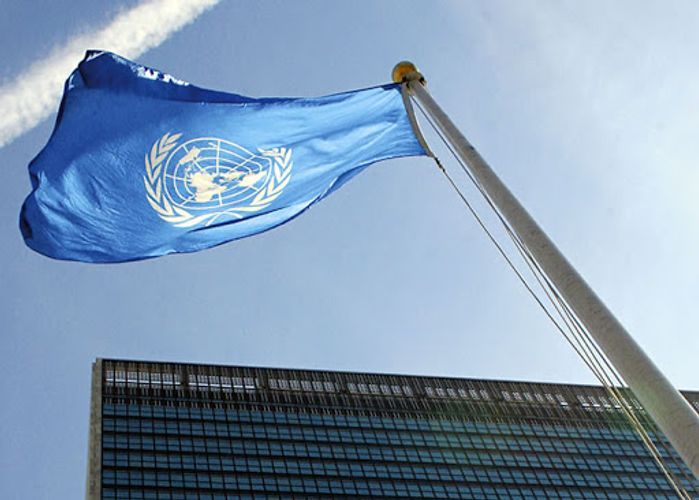 Permanent Representative of Azerbaijan to the United Nations (UN), Ambassador Yashar Aliyev has sent a letter to the Secretary-General of UN on 1988 Sumgait events, APA reports.

The letter notes that the official investigation established that it had been a well-prepared provocation masterminded by the Armenian extremist organizations "Karabakh" and "Krunk" to discredit Azerbaijan and cover-up Armenia's unlawful annexationist intentions and violent methods for their achievement.

"I am writing with reference to the letter dated 28 February 2020 from the Permanent Representative of Armenia (A/74/728-S/2020/169), containing as its annex the statement of the Ministry of Foreign Affairs of Armenia on the commemoration of the so-called "anti-Armenian pogroms in the city of Sumgait" in February 1988. No doubt, the said statement, which cynically alleges that "the Sumgait pogroms marked the beginning of the Nagorno-Karabakh conflict when Azerbaijan responded to the peaceful appeal of the people of Nagorno-Karabakh te self-determination", is yet another illustration of a blatant falsification and deliberate distortion of facts. The following points need to be made in that regard. First, it is well known that the unrest in Sumgayit, stirred up during the existence of the Soviet Union in February 1988, was preceded by carefully orchestrated attacks at the end of 1987 on the Azerbaijanis in Khankandi' and in Armenia itself, resulting in a flood of Azerbaijani refugees and internally displaced persons The forcible deportation of Azerbaijanis from Armenia started in its Kafan and Mehri districts in November 1987. The Azerbaijanis, solely because of their ethnic identity, were the first to be subjected to violence and abuse On 22 February 1985 in Azerbaijan, near the settlement of Asgaran on the Khankandi-Aghdam highway, the Armenians opened fire on a peaceful demonstration, killing two Azerbaijani youths.

It is undeniable that the Azerbaijanis in the Armenian SSR and the then Nagorno-Karabakh autonomous oblast of the Azerbaijani SSR were the first victims of the conflict and that Armenia's territorial claims and actions, at the core of which are fabricated history and racially motivated hatred, were never peaceful, nor were they constitutional or in compliance with international law. In the end, both the territory of Armenia and the occupied territories of Azerbaijan were ethnically cleansed of hundreds of thousands of Azerbaijanis, and the process of their expulsion was accompanied by killings, torture, enforced disappearances, the destruction of property and pillaging.

Second, Armenia's claims for self-determination of a relative ethnic group residing in Azerbaijan are groundless und flawed for a number of reasons. Thus, the illegality within the Soviet legal system of attempted separation of the Nagorno Garabagh region That the Nagorno-Karabakh region is an inalienable part of Azerbaijan has been subsequently reaffirmed by the Security Council of the United Nations, which, in its resolutions 822 (1993), 853 (1993), 874 (1993) and 884 (1993), made it clear that Armenia's territorial claims and actions not only have nothing in common with the right to self-determination but are unlawful and incompatible with the prohibition of Azerbaijan was conf ed at the constitutional level. the use of armed force in international relations.

The population of the Nagorno-Karabakh region consists of Armenian and Azerbaijani communities, who are entitled to the full enjoyment of human rights on an equal and non-discriminatory basis. Armenia cannot demand privileges at the very core of which are gross and systematic violations of international law and the discriminatory denial of rights and freedoms with respect to the significantly larger Azerbaijani population expelled from and denied access to, their homes and properties in both Armenia and the occupied territories of Azerbaijan.

As to the Sumgait unrest in February 1988, the official investigation established that it had been a well-prepared provocation masterminded by the Armenian extremist organizations "Karabakh" and "Krunk" to discredit Azerbaijan and cover-up Armenia's unlawful annexationist intentions and violent methods for their achievement. The investigation found that one of the organizers and perpetrators of criminal acts committed in Sumgayit, which claimed the lives of 26 Armenians and Azerbaijanis, was Eduard Grigorian, an Armenian and resident of the city. Among the evidence collected by the investigation, testimonies of the witnesses, including Armenians, provide irrefutable proof of his role and direct participation in violence. E Grigorian was sentenced to long-term imprisonment. Besides him, in all, 92 persons were brought to justice for offenses in Sumgayit.

In contrast, nobody has been prosecuted in Armenia for the brutal killings of hundreds of Azerbaijanis in the course of their forcible deportation from Armenia during the 1987-1989 period, as well as for massacres committed against the Azerbaijanis in the course of the Armenian aggression The recently published comprehensive report (7 February 2020) on war crimes in the occupied territories of the Republic of Azerbaijan and the Republic of Armenia's S/2020/90) provides convincing evidence as to the range, variety, and consistency of Armenia's commission of multiple war crimes, some of which amount to the crime of genocide, as ethnic Azerbaijanis have been targeted because of their nationality and or ethnicity, and the relevant intent has been to destroy the group in part. Laurence Broers has described the Khojaly massacre, as a result of which 613 Azerbaijani civilians were killed by Armenian forces, including 106 women, 63 children, and 70 elderly people, and another 1,000 people were wounded and 1.275 people were taken hostage, as "by a large margin the worst single atrocity of the Armenian-Azerbaijani war"

Armenia's denial of its responsibility for atrocity crimes it has committed against Azerbaijan and its citizens, including through apparent falsifications and distortions of the past and present and glorification of war crimes and their perpetrators, constitutes a clear violation of international law, as well as being in de finance of human rights, a direct obstacle to lasting peace and genuine reconciliation, and a threat to regional security and stability.

As to the essence of the conflict resolution, peace, security and stability are achievable, first and foremost, only if the consequences of Armenia's aggression are removed, thereby ensuring that its armed forces are immediately, unconditionally and completely withdrawn from the Nagorno-Karabakh region and other territories of Azerbaijan under occupation, the territorial integrity of my country is restored within its internationally recognized borders and the right of internally displaced Azerbaijanis return to their homes and properties is ensured and implemented.

I should be grateful if you would have the present letter circulated as a document of the General Assembly, under agenda items 32, 37, 68, 70 and 83, and of the Security Council."