President Ilham Aliyev: "I got information that the so-called “leader of Nagorno-Karabakh” is already in Yerevan" 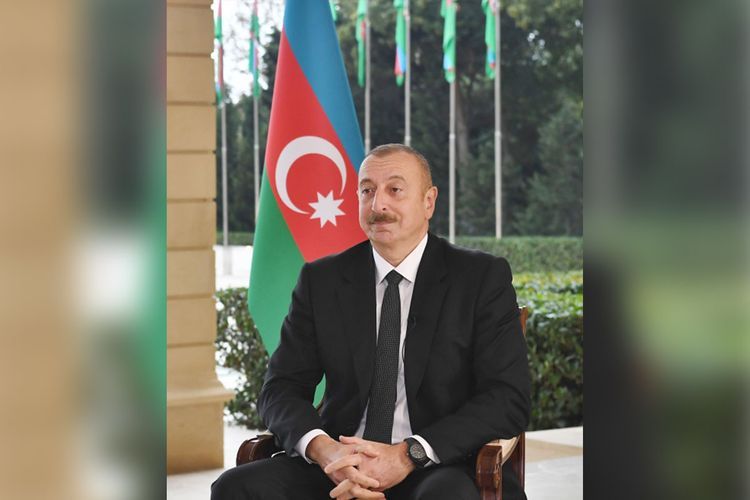 "No. Please be accurate with my statements. What I said, I meant those who continue to occupy our territories, I meant Armenian military-political leadership, I meant the so-called “authorities of Nagorno-Karabakh”, this criminal junta which has already, by the way, run away. And I got information that the so-called “leader of Nagorno-Karabakh” is already in Yerevan. So, I meant them, I didn’t mean Armenian people", said President of the Republic of Azerbaijan Ilham Aliyev in his interview with BBC News on November 6 while answering a question on "Well, with respect President Aliyev, you are saying that the Armenians will consider to live there as your citizens. You have very recently said and I am quoting you here: “If they do not leave we will chase them like dogs.” Now, that’s hardly the kind of statement that would make people feel safe", APA reports.

As a response to the question of "So, are you saying that you will give an absolute guarantee that there will be no ethnic cleansing of Armenian citizens in Nagorno-Karabakh?" Azerbaijani President said: "Yes. We are not Armenians. They committed ethnic cleansing against us. They expelled all Azerbaijanis from Nagorno-Karabakh and seven surrounding districts. Thus, we have one million refugees as a result of the ethnic cleansing policy of Armenia. But we will not behave the same way, we will not take revenge. I said many times even when they bombed Ganja, when they bombed Barda, when they bombed other cities and killed 92 people, civilians, I said we will take revenge on the battlefield. Therefore, taking into account, this official position and the fact that there are thousands of Armenians who live in Azerbaijan, and nobody is ethnically cleansing them, why should we do it there?"