President Ilham Aliyev: "Where are you, the Council of Europe? Why are you tight-lipped?" 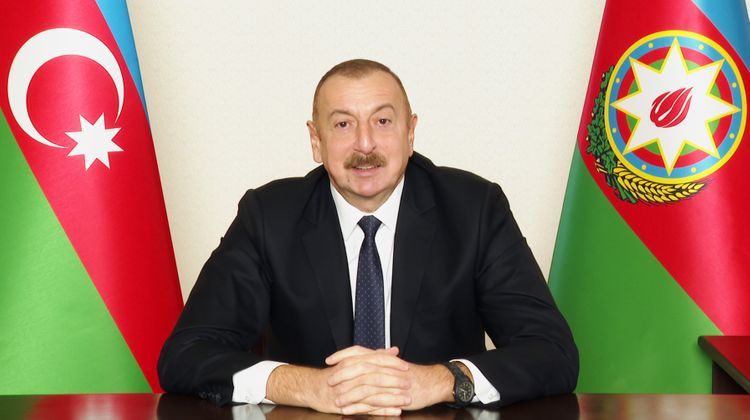 "From now on, we will move even faster along the path of development. We have achieved what we wanted on the battlefield. Our soldiers and officers showed their strength. We have shown our strength in the political sphere, and the trilateral statement fully meets our interests. This is why this statement was signed in front of the eyes of the whole world, by the President of Russia and myself. It is still impossible to say where the Armenian prime minister signed it. But that doesn’t matter much. It doesn't matter if it happened in a warehouse, a locked-up room or a bunker in which he lives. His signature is there. It is, in fact, an act of capitulation. This is the Victory of Azerbaijan, the return of our lands and the raising of our flag", said President of the Republic of Azerbaijan Ilham Aliyev in his address to the nation on the occasion of liberation of Aghdam, APA reports.

"Fizuli, Jabrayil, Zangilan, Gubadli, Hadrut, Sugovushan, Murov Mountain and Shusha were liberated from the occupiers on the battlefield, including several villages of Lachin district and a part of Kalbajar district. This is what conditioned our victory. Our victory has already created big problems in Armenia. But look at the reaction of international organizations. Is there a reaction? No! Every day an opposition leader gets arrested in Armenia in a completely unfounded manner. Has any Western country reacted to this? No! Did they condemn it? No! Leaders of major opposition parties have been arrested, but no-one speaks up. Where are you, the Council of Europe? Where is the Council of Europe, which despises Azerbaijan and tries to discredit us? Why are you tight-lipped? Or the monitoring committee. Several rapporteurs for Azerbaijan have been appointed there. Armenia must be monitored. Why are you silent, the Council of Europe? Where are your leaders, where is your monitoring committee, where is the political committee? Don't you see that there are repressions in Armenia? Can’t you see that the dictator is doing whatever he pleases? In fact, a defeated dictator, a humiliated dictator. So why don't you speak up? Where is your democracy, where are your human rights? Is there an answer? No! And there won’t be one. Even after my words, there will be none. They will cover it up, hush it up. The European Parliament has adopted more than 10 ugly and false resolutions against Azerbaijan. Why are you silent, the European Parliament? You consider yourself the center of democracy in the world. Speak up, make a statement, make a statement and condemn this. A dictator destroys all the opposition right in front of everyone in the world. He kills a man. One of the persons who occupied the parliament has already been found dead. Why don't you speak up? Why? Non-governmental organizations which regularly campaign against us, why are you silent, why don’t you speak up? When we were hit with a ballistic missile, you were silent, when we were hit with cluster munitions and phosphorus bombs, you remained tight-lipped. Great countries, countries that claim to European leaders, why are you silent? Tell me, answer me! But it turns out that anyone can come and lecture us here. I am answering all of them, all of them, and with a vengeance", noted head of state.