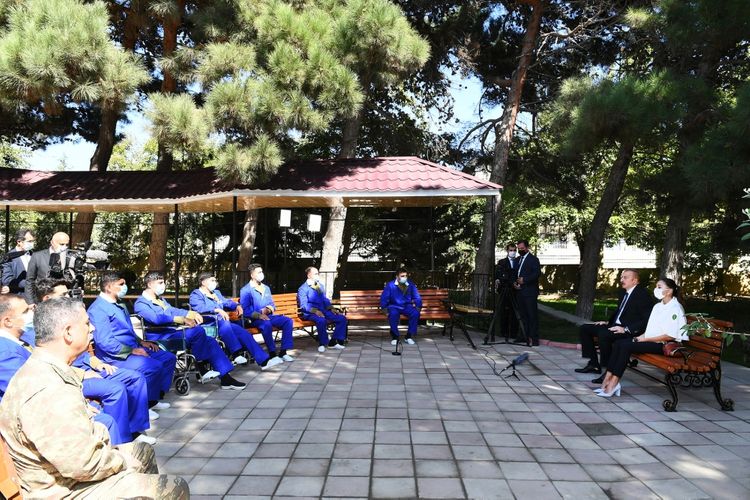 “Armenia must vacate our lands immediately. You know that the leaders of various international organizations and different countries are calling me, enquire about this issue, express their views. My word is the same – both internationally and domestically. We are on the right path, the battles are going on in Azerbaijan, Azerbaijan is restoring its territorial integrity, and we have every right to do so,” President of Azerbaijan, Commander-in-Chief of the Armed Forces Ilham Aliyev said in a meeting with servicemen wounded in the aftermath of Armenia's military provocation launched on 27 September and being treated at the Central Military Clinical Hospital of the Defense Ministry, APA reports.

Emphasizing that no country in the world recognizes the so-called “Nagorno-Karabakh republic”, President Ilham Aliyev said: “This is our historical land. From the point of view of international law, this is our land. I am confident that Azerbaijan will restore its territorial integrity. There is high morale in the army. You know that too. There is high morale in society. I have been receiving many letters every day for the last three to four days, both from citizens of the country and from other countries. Most letters from abroad come from brotherly Turkey. In those letters, our Turkish brothers express their desire to fight with us for this just cause. I express my appreciation to them. But I want to say again that there is no need for that. The Azerbaijani Army is quite strong and well-equipped. We must resolve this issue so that historical justice is restored. At the same time, on behalf of all of you and all the people of Azerbaijan, I express my deep gratitude to brotherly Turkey, its President, my brother Recep Tayyip Erdogan, for his resolute and brotherly position. Because my dear brother's very open and harsh statements show again that Azerbaijan is not alone. Turkey is with Azerbaijan and Azerbaijan is always with Turkey!”