President Ilham Aliyev: If Armenia flouts international law, why should we abide by it? 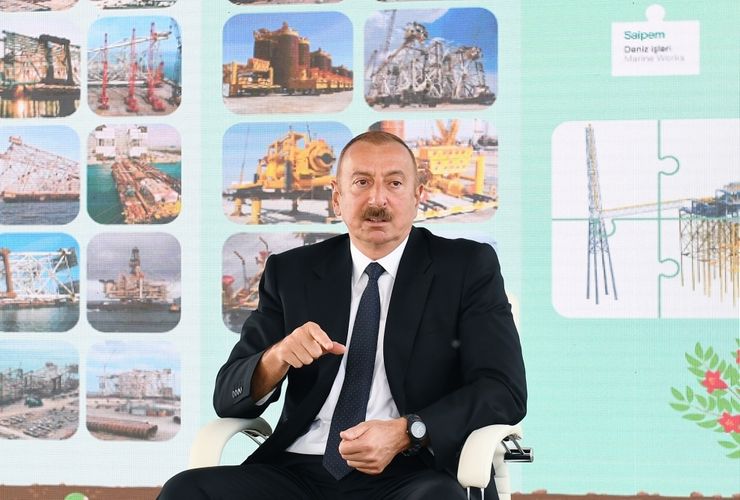 “The prime minister of Armenia puts forward seven conditions to us. First of all, who are you to speak to us in the language of conditions? If we wanted to talk to him in the language of conditions, his political life would not last long. I have said that we are rejecting these nonsensical conditions. We have one condition – they must leave our lands unconditionally and completely. This is reflected in UN Security Council resolutions. There are staging some comedy-like trainings there. In other words, every single step is an open provocation against us,”  President of the Republic of Azerbaijan Ilham Aliyev said in an interview with Azerbaijani television channels after the groundbreaking ceremony for the Absheron field offshore operations at the Heydar Aliyev Baku Deep Water Jackets Plant on 19 September, APA reports citing the Presidential press service.

“The July provocation is already an armed provocation, and it is no secret to anyone that it was instigated by Armenia. A high-ranking official of one of the Minsk Group co-chairs has openly confirmed that. I said back then and am saying today that we have no military targets in Armenia. If we wanted to, we could have moved into Armenia and had full military capabilities to do that. We did not do that. Because this is not part of our military concept – unless we are seriously provoked. If they do, then there will be no limits for us. Let everyone know that there will be no limits. If they are flouting international law, why should we abide by it?! We will flout it too, but the end will be bitter for them.”

“After the July provocation came the August provocation. Acts of terror against our civilians, a sabotage group was sent to commit military provocations against our servicemen, and the leader of that sabotage group was arrested. He gave evidence, made a confession, mentioned names of those who sent them and how. In other words, he is not a shepherd or a child who lost his way... Who committed this provocation? Did we send a sabotage group? No, they did! Did we commit the July events? They did! Did we kill their citizens? No, they did! There were no civilian casualties on the Armenian side but our 76-year-old elder was killed and many homes were destroyed. Therefore, these provocations are in fact the logical result of that policy. The goal is to disrupt the talks, then blame us and make the status quo unchanged. This is their goal. This is why they think they can do it. I think they are wrong. The sooner they understand this, the better it will be for them.”