President Ilham Aliyev: It is a crime to bring people to the occupied territories and settle them there illegally 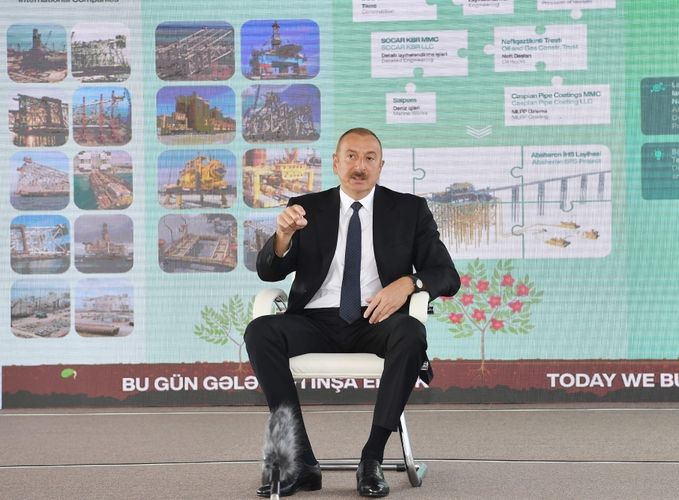 “The nonsensical thoughts voiced by the Armenian prime minister last year dealt a serious blow to the negotiations. By saying ‘Karabakh is Armenia’, he not only spread lie all over the world and this continues to this day, but also made the negotiations meaningless. If he thinks that Karabakh is Armenia, then what can we talk about? If he thinks that Karabakh is Armenia – although the whole world rejected this nonsense – then what kind of peace agreement can we talk about? In other words, it was a political provocation,”  President of the Republic of Azerbaijan Ilham Aliyev said in an interview with Azerbaijani television channels after the groundbreaking ceremony for the Absheron field offshore operations at the Heydar Aliyev Baku Deep Water Jackets Plant on 19 September, APA reports citing the Presidential press service.

“The second political provocation was that Azerbaijan should hold negotiations with Nagorno-Karabakh, not Armenia. This also means changing the format, and, of course, we can never agree to that. Because we have no contact with this puppet regime of criminal junta. At the same time, the co-chairs of the Minsk Group, of course, could never agree to that.”

“In fact, these statements give grounds to say that Armenia has withdrawn from the talks – not us but Armenia. This being the case, if we say that let's start negotiations or continue them, it will just be irresponsible and we should not deceive ourselves, we should not deceive our people. Negotiations are not going on, and this is not due to the pandemic. Of course, the pandemic has intervened, but negotiations are not taking place without the pandemic. These politically flawed and harmful statements do not leave room for negotiations.”

“Armenia is conducting illegal settlement. This contradicts all international conventions. They are not smart enough, they don't have experience, they don't have knowledge to show it so demonstratively. This is completely contrary to the Geneva Convention. It is a crime. It is a crime to bring people to the occupied territories and settle them there illegally. The Pashinyan regime is doing this consciously. This is a provocation. We are being provoked, they show it on the Internet – some Lebanese Armenian family has come and is doing something there. After that, the so-called leader of the so-called regime is allegedly sworn in our ancient historical city of Shusha. This is another provocation. This is an open insult to us. Do they think we can tolerate that? Who is doing this provocation? They are! We do not commit any provocations. We have stood our ground.