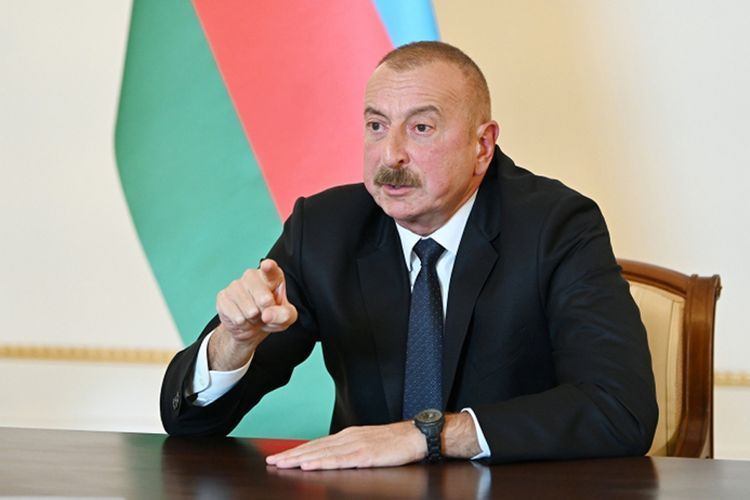 "After all, our main point of hope in the talks was that it was stated that the occupied lands would be gradually returned to Azerbaijan. We also agreed to return them in stages and peacefully," said President of the Republic of Azerbaijan, Commander-in-Chief of the Armed Forces Ilham Aliyev in his address to the nation, APA reports.

"Let five districts be returned at the first stage, two at in the second stage, then let the Azerbaijanis return to Nagorno-Karabakh, return to Shusha, and then let the Azerbaijani and Armenian peoples live together as we once did. This is a fair position. This position is in compliance with all norms of international law. What did we want? We wanted this much, we were and are entitled to that. But what did we see?! We saw that they want to break the will of the Azerbaijani people. We saw that a new war is being waged against us, that we are being threatened with a new war. We saw that in July, for no apparent reason, our city of Tovuz and other settlements came under fire, our servicemen were killed, one civilian was killed. We saw that a sabotage group was sent in August and the head of that sabotage group was neutralized and detained. Now he is testifying and saying that he was sent to commit acts of terror. Is this a commitment to the process of negotiations?! Then, the prime minister of Armenia makes nonsensical statements, falsifies history, tries to deceive his people and the international community. A year ago, he torpedoed the whole process of negotiations by saying that “Karabakh is Armenia, full stop”, making it meaningless. Attempts to change the format of talks, the words that “Azerbaijan must negotiate with the so-called puppet junta” completely contradict the negotiations. Did he get an adequate response? I have repeatedly told Minsk Group co-chairs, the co-chairs' ambassadors, other international organizations and the European Union to influence Armenia, to impose sanctions and put pressure on it. This can’t be allowed to happen. If there is no strong pressure, Armenia will become even more impudent, even more impertinent and start making new claims. They did not listen to me. I wanted this issue to be resolved peacefully. They did not listen to me. Did they think that the Azerbaijani people and I, the President of Azerbaijan, would put up with this situation?! They thought that our holy city of Shusha would be trampled by the Armenians and I would put up with that?! Are we supposed to negotiate with the Armenian executioners who have dealt a blow to the history of the Azerbaijani people? The people of Azerbaijan were insulted when the head of the so-called regime held a “swearing-in ceremony” in Shusha. Let’s see now where he will hold the swearing-in ceremony now, a funeral ceremony will be held! He has now run away and went into hiding like a mouse. Come on out! The prime minister of Armenia dances in Shusha, on the Jidir plain, and thinks that we will put up with that?! They are wrong! We will never put up with that. What does it mean to move the parliament of the so-called “Nagorno-Karabakh republic” to Shusha?! Again, it is an attempt to insult the Azerbaijani people. What does it mean to build a new road from Armenia to Jabrayil?! This means that there will be illegal settlement. Armenians are already being brought from Lebanon and other places, and being resettled in our ancient city Shusha, and this is shown on television in violation of international conventions, in violation of the Geneva Convention. Does anyone say a word to them?! I have asked all our foreign diplomatic missions to raise the issue, tell the UN, the OSCE, the European Union, other organizations that it is illegal! Illegal settlement is a crime! Was there a reaction to that?! Did the Minsk Group make a statement?! It did not! Did the European Union make one?! It did not! They said that we are not interested in that. If they are not interested, then don't be interested now. Why are you raising a hue and cry now then? What are these tricks for? There are slandering against Azerbaijan. Some countries, European countries are accusing us. Let them go and look in the mirror. These accusations have no basis. Someone says that they will not allow Azerbaijan to conquer Nagorno-Karabakh. Nagorno-Karabakh is ours, it is our land, we must return there, we are returning there and we will return there!" said Azerbaijani President.