President: Basic principles of international law, which have the reflection in the Helsinki Final Act, principle of territorial integrity is prevailing 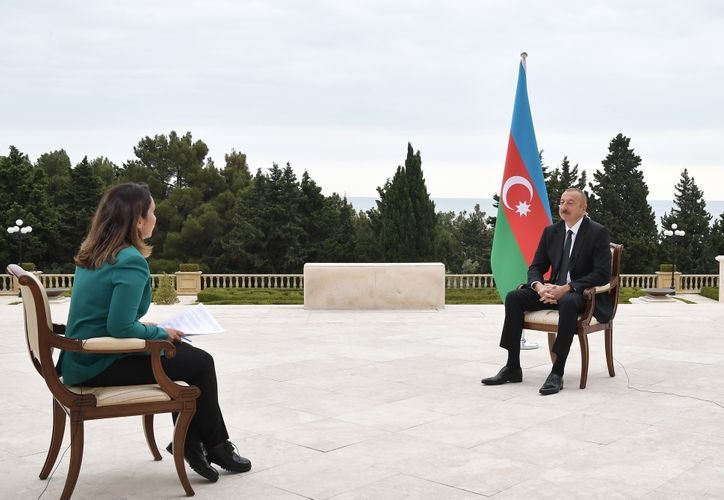 "This is the point which Armenian propaganda often uses. Thus trying to mislead the international public opinion, which of course broadly ordinary people, they are not specialists in the international law. But there are very clear identification of the basic principles of international law, which have the reflection in the Helsinki Final Act. Principle of territorial integrity is prevailing, self-determination is one of the important principles of international law. But if we go back to UN Charter, if we go back to Helsinki Final Act, we will see that self-determination should not damage territorial integrity of the countries," President of the Republic of Azerbaijan Ilham Aliyev said in an interview to Al Jazeera TV channel, APA reports.

The head of state noted that other important point, the territorial integrity of the country cannot be changed by force, and cannot be changed without an agreement of the people of the country: "Therefore, in the case of Nagorno-Karabakh conflict of course, self-determination is not working the way how Armenians want to do it. And another argument, Armenian people already self-determined themselves. They have independent Armenian state. Today Armenians live everywhere. They live in France, they live in America, they live in Russia, they live in Middle East, let them ask for self-determination in those countries. What would be reaction of authorities of those countries if Armenians would ask the land which does not belong to them and ask this land only because they now became majority? Their tactics which they use for many-many years to come, to ask for support, to ask for land, and then to start changing the historical identity of the territory, making fake news about their so-called ancient history, and demand those lands for them. Those countries which want to give self-determination to Nagorno-Karabakh, let them give part of their land to Armenians from Nagorno-Karabakh, take them and give self-determination there. I would see what will be their reaction."