President: I have a negative assessment of the current state of negotiations and I think the Azerbaijani people fully agree with me 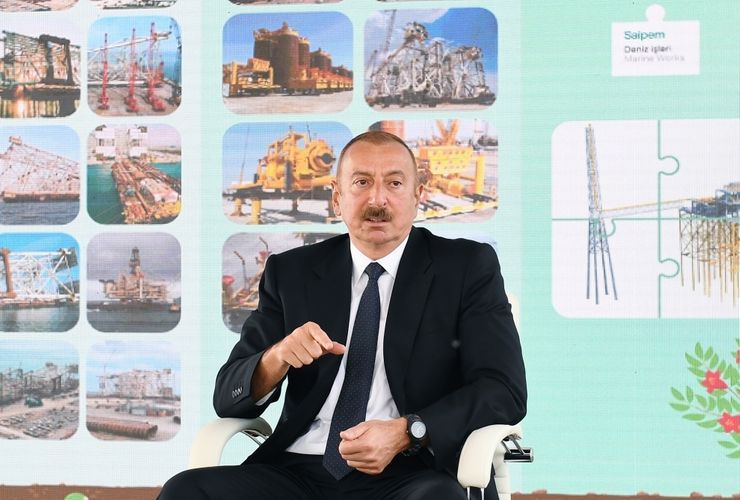 “I have a negative assessment of the current state of negotiations. I think the Azerbaijani people fully agree with me. As you know, I have always told the truth to the people of Azerbaijan. I think this is the only right policy. The people must know what is happening, where we are and what our policy is. In my speeches and meetings with the media, I clarify topical issues, and I think this is very important. Citizens must know this, and they need to get the right information to do the right analysis,” President of the Republic of Azerbaijan Ilham Aliyev said in an interview with Azerbaijani television channels after the groundbreaking ceremony for the Absheron field offshore operations at the Heydar Aliyev Baku Deep Water Jackets Plant on 19 September, APA reports citing the Presidential press service.

“Negotiations are virtually non-existent. I have said before that we will not participate in negotiations for the sake of their imitation. This does not mean that we are refusing to negotiate. It means that we do not want to join Armenia's cunning policy. Our participation in an imitation of negotiations would correspond to the essence of this imitation. In fact, the Armenian leader has disrupted the process of negotiations. He is not disrupting it, but has already disrupted it. Because their nonsensical statements and provocative steps make the talks meaningless. Unfortunately, the current leadership of Armenia does not realize this responsibility. They also fail to properly analyze the consequences of their actions. However, there are rationally thinking people and politicians in Armenia, and these politicians are already raising this issue and telling the Armenian public that the incumbent Armenian leadership is leading Armenia into the abyss.

As you know, two years ago, when a coup took place in Armenia, Azerbaijan remained neutral. In other words, we did not attempt to take advantage of the situation. We thought it was necessary because the previous Armenian government only aroused hatred among the Armenian people. This military-criminal regime had brought Armenia to an appalling state, especially since the new government began to make very encouraging statements that they want to resolve this issue. They criticized the previous government and sent us positive signals through unofficial channels, asking us for some time. We also lived with the hope that the new government would innovate all areas, including this area, and would correct the previously wrong policy. This idea became even stronger after my meetings with the prime minister of Armenia in Dushanbe. At that time, I was asked to give them some time, because the domestic situation in Armenia was difficult, representatives of the previous government wanted to take revenge and this would have a very negative impact on the negotiations. They claimed to be inclined to negotiations and wanted to resolve the issue. The request was made to strengthen the ceasefire. My word was that we must hold serious talks and, of course, the ceasefire would be even stronger.

After that meeting, both sides made separate statements on the basis of agreement, and the main essence of the statements was that we met, held an informal and unofficial meeting, agreed to speed up the negotiations and strengthen the ceasefire. Because these two positions must always correspond to each other. Otherwise, it would mean a strengthening of the status quo, and we can never agree to that. For some time, the co-chairs of the Minsk Group also lived with hopes and occasionally, during meetings, put forward theories that were full of hope,” said the head of the state.