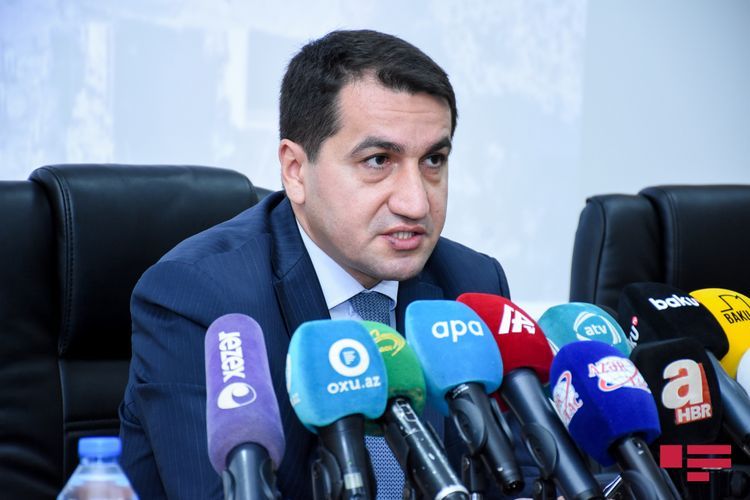 According to Mr. Hajiyev, foreign media outlets also citing intelligence information reported on the deployment of PKK terrorists in the occupied Azerbaijani city of Shusha and the wearing of military uniforms by the Azerbaijani armed forces.

“We would want to remind that fake videos on foreign mercenaries in military uniform of the State Border Service of the Republic of Azerbaijan have been prepared by the Armenian side unprofessionally a while ago and it was described as a so-called “fighting” of mercenaries on the Azerbaijani side. We should unfortunately note that some prestigious media bodies cited the fact without checking it.

The sitting of an Armenian soldier in military uniform of the State Border Service of the Republic of Azerbaijan by the Defense Minister of Armenia proves once more the fact of the shooting of such fake films like Bollywood under the leadership of Armenia’s Defense Ministry.

The staging of the alleged killing of two Armenian prisoners of war in the Hadrut region is also the result of the rich creativity of the Armenian Defense Ministry and its subordinate structures. It is very unfortunate that this false fact was published in the language of the Armenian author on the BBC's online resource without serious investigation.

The Armenian leadership and the criminal junta regime have no moral-ethical restrictions.

Dressing PKK terrorists and Armenian soldiers in Azerbaijani military uniforms, the Armenian side may organize the commission of war crimes by them against the Armenian civilian population and then attempt to hold Azerbaijan accountable by involving all propaganda resources.

PKK terrorists, who were killed in battle and dressed in military uniforms of the Azerbaijani armed forces, can be allegedly presented as mercenaries fighting on the Azerbaijani side.

We remember well the fact that in 1988, with support of USSR SSS, the Armenian special services organized pogroms against the Armenian civilian population in Sumgait under the leadership of the Armenian criminal Eduard Grigoryan, and then blamed Azerbaijan for it.

We call on the Armenian civilian population living in the occupied territories of Azerbaijan to be vigilant against such potential provocations of Armenian armed forces and criminal junta regime, to stay away from military facilities.

As noted by Supreme Commander-in-Chief, President Ilham Aliyev Azerbaijan has nothing to do with the Armenian civilian population.

We are ready to provide all necessary support on the basis of humanism principles and Geneva Convention to civilians and Armenian servicemen who want to cross to the territories under the control of Azerbaijani Armed Forces,“ stressed Assistant to President.