Presidential aide: “Familiarization with the document reveals once again that Armenia’s latest provocation in the direction of Tovuz district of Azerbaijan was carried out on purpose” 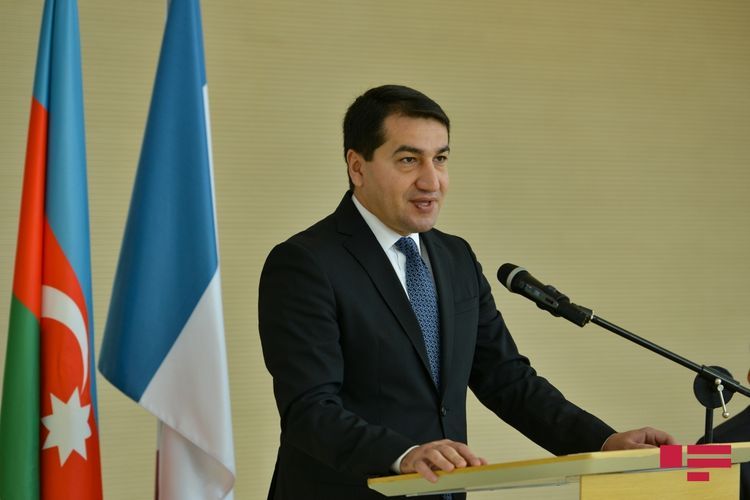 “In general, comments on the territory of another state in a document belonging to Armenia itself are clear evidence of the policy of aggression,” said Assistant to the President of Azerbaijan, Head of Foreign Policy Affairs Department of the Presidential Administration Hikmat Hajiyev as he commented on Armenia’s new national security strategy, APA reports.

“The document states that Armenia is committed to negotiations within the framework of the OSCE Minsk Group. However, the statements of the prime minister of this country (“Karabakh is Armenia and full stop”) and the minister of defense (“a new war for new lands”), attempts to involve the so-called regime in negotiations, as well as provocative opinions expressed in the strategy in connection with the conflict, prove that Armenia is deliberately disrupting negotiations and intends to continue the occupation.

The strategy notes that there must be the necessary lines of defense to ensure the security of the unrecognized structure, as well as safe diversified communications with the outside world, including Armenia. This is a hint at Lachin district and other occupied districts adjacent to the Nagorno-Karabakh region of Azerbaijan. This once again demonstrates that Armenia has no intention of returning the occupied Azerbaijani lands.

The document notes in several places that Armenia is the guarantor of the security of the so-called structure. This is overt recognition of the fact of occupation. In addition, it is argued that Azerbaijan's desire to resolve the conflict by military means poses a threat to the physical existence of the population of the so-called structure. In essence, the aggressive policy of Armenia has put an end to the physical existence of the civilian population of Azerbaijan in its native lands. Having driven out about a million civilian Azerbaijanis from their native lands, Armenia carried out a policy of ethnic cleansing.

The strategy notes that the goal of the negotiations is to “preserve the outcomes of the war”. This explicitly shows that Armenia intends to keep on occupying the territories of Azerbaijan and is not interested in negotiations that serve sustainable peace.

Familiarization with the document reveals once again that Armenia’s latest provocation in the direction of Tovuz district of Azerbaijan was carried out on purpose,” H. Hajiyev stressed.