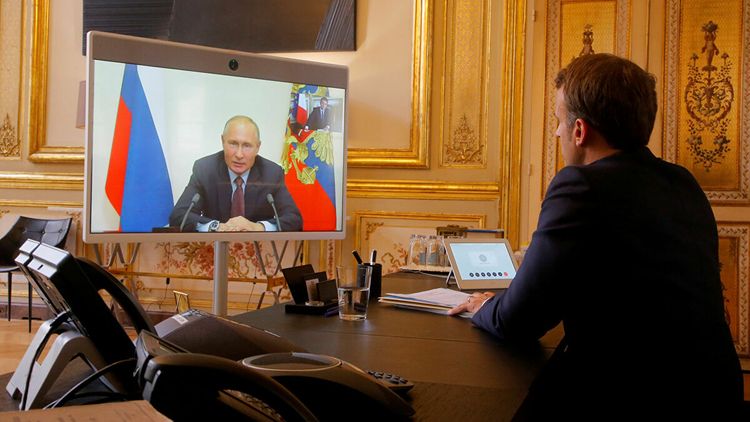 Russian and French Presidents Vladimir Putin and Emmanuel Macron have discussed escalation in the disputed region of Nagorno-Karabakh, the leaders have called on the opposing parties to exercise maximum restraint and to cease hostilities as soon as possible, the Kremlin press service reported following a phone call initiated by the French side, APA reports citing TASS.

"The sharp deterioration of the situation in the Nagorno-Karabakh conflict zone was discussed in detail. Serious concerns were expressed in light of the continuing large-scale hostilities. Vladimir Putin and Emmanuel Macron called on the opposing party to implement an immediate and full ceasefire, de-escalate tensions and show maximum restraint," the statement reads.

The press service added that the conversation highlighted the fact that there are no alternatives to settlement of the Nagorno-Karabakh crisis by political and diplomatic means. "In this context, specific parameters of further cooperation, particularly in the OSCE Minsk Group, were reviewed. The willingness to make a statement on behalf of the Minsk Group co-chairs (Russia, France, the US) in support of an immediate stopping of the armed confrontation and resumption of the negotiating process," the Kremlin informed.