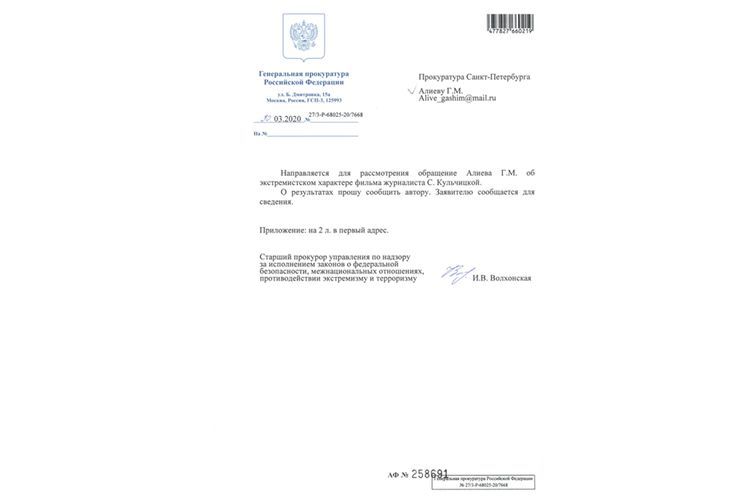 The appeal of the member of Regional National Cultural Autonomy of Azerbaijanis of Moscow oblast Hashim Aliyev about investigation into whether or not the “Return” film of TV journalist Svetlana Kulchitskaya bears extremist character has been sent by the senior prosecutor of the Federal Department for control of counter-activity against security, interethnic relations, extremism and terrorism I.V. Volkhonskaya to Saint-Petersburg Chief Prosecutor’s office for consideration.

Note that the documentary film produced by the Russian TV journalist Svetlana Kulchitskaya and entitled as “Return”, telling the story of the war waged in 1990-ies in Nagorno Garabagh has been shot by financial support of the Armenian Republic. In this film, the historical Azerbaijani lands are shown under the title of Eastern Armenia. The film tells the story of the fight for “independence” and “freedom” waged by Armenians without army and in blockade condition in 1990-ies in Nagorno Garabagh.

Remind that this film was demonstrated by the Armenian Diaspora in Russia on March 11 this year at the Cinema House situated in Moscow’s Vasilyevskaya street.