Schneor Segal, Alexander Ata and Allahshukur Pashazade responded to those who presented the events in Nagorno-Karabakh as a religious war - ARTICLE 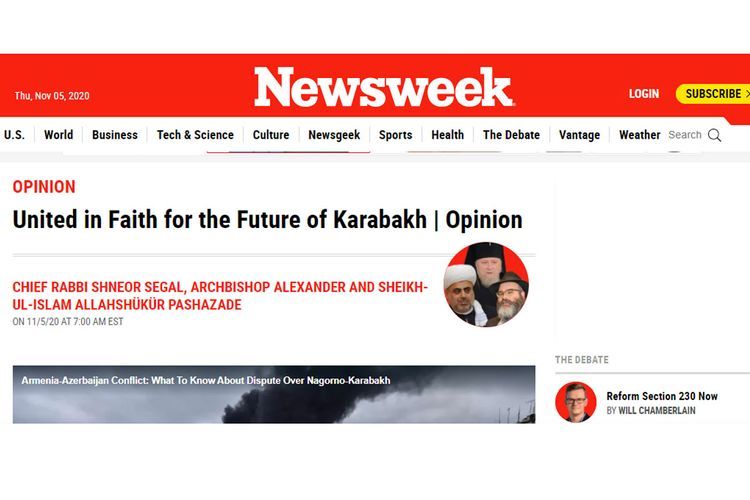 "When we, as religious leaders from our country's Jewish, Christian Orthodox and Muslim communities, hear the international media say that our nation is involved in a "holy war" where "Christians are in peril," it is time for us to speak out," Shneor Segal, the Chief Rabbi of Azerbaijan, His Grace Alexander, Archbishop of Baku and Azerbaijan Episcopate of the Orthodox Church and Sheikh ul-Islam Allahshükür Pashazade, the leader of Azerbaijan's Muslims said in a joint statement, APA reports.

"We may be of different faiths, but we are all of one nationality—Azerbaijani—and our country, we are told, is playing the role often reserved for Islam in this fictional war of religion.

The escalating conflict the world is witnessing between Armenia and Azerbaijan is not religious in nature, no matter how much others wish it to be, nor is Azerbaijan playing the "Muslim invader" part in international fantasy. Ours is a multi-religious, multi-ethnic nation with a flourishing Ashkenazi Jewish community, our own unique Mountain Jewish community and Christians of the Catholic, Orthodox and Armenian traditions. Even Islam is not of one single branch, with both Sunni and Shia amongst our fellow citizens.

Armenia certainly is a Christian nation. It is even more so today than it was 30 years ago when—during the 1988-94 conflict that led to the Armenian occupation of Azerbaijan's territory—more than 300,000 Azerbaijanis, mostly Muslims, were forced from Armenia as refugees.

That war also saw 700,000 Azerbaijanis evicted from Nagorno-Karabakh and surrounding territories, which are still occupied by our neighbor though internationally recognized as within our nation's borders.

Azerbaijan does not play the role of invader—Muslim or otherwise—that has been chosen for us. Where once Armenian and Russian Orthodox churches flourished alongside Mosques, today in Nagorno-Kharabakh only Armenian churches are open. Other places of worship have been converted, damaged or demolished. Yet Azerbaijan has shown that it can have churches, synagogues and mosques all functioning peaceably in the same cities and towns.

What Azerbaijan offers is not the ejection of those who live in Nagorno-Karabakh today, but the return of those who were once themselves ejected. Our country offers the chance for autonomy within the legal borders of Azerbaijan for those who wish to live there, in peace, with different religions, cultures and ethnicities. What is on offer is a return—only now with reconstruction, and more determination and commitment to build mutual understanding.

We have strived for close to a generation, and even more so in recent weeks, to unite as members and communities of the Abrahamic faiths. The chief rabbi visited and prayed with Jewish families in the residential neighborhoods of Ganja, Azerbaijan's second city, when it was targeted by missiles. The archbishop conducted a funeral for a young Azerbaijani Christian soldier killed on the battlefront, one of many from our Christian communities serving as volunteers in the armed forces. The grand mufti has sought to comfort the many Muslim families who have lost loved ones. We have met together and prayed together. It is our duty as men of faith to stand with all our peoples, regardless of whether they themselves are of any particular faith or none.

We know that others, including those the media tell us should be our adversaries, share this duty. Only last week Archbishop Sahag—one of the four Patriarchs of the Armenian Apostolic Church—reportedly affirmed that "the tragic events in the Caucasus are not an inter-religious conflict."

We have hope that the world will see past this narrative. It is dangerous to play politics with religion—and equally so to attempt to pit religions against each other.

We prefer to leave politics to the politicians. It is extremely dangerous for politicians to see themselves as exceptional, and to promote their country as such in religious terms. We ask them to stop and reconsider. They know not what they do. There are countries rich and poor, which are Christian, Muslim, Jewish and others of many faiths. But we must remember, when we seek His blessings, we are all equal in the eyes of the Lord."